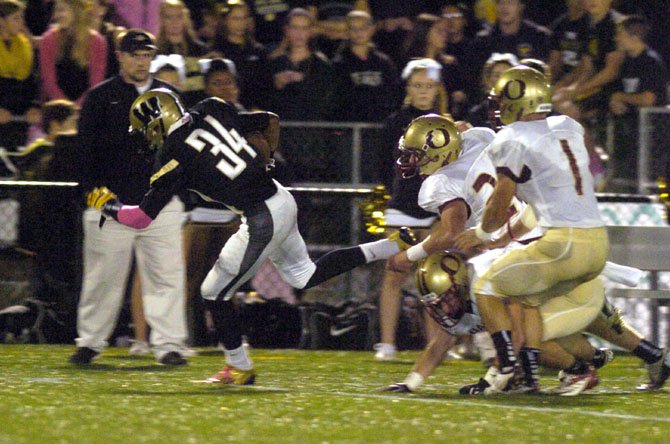 Westfield quarterback Chris Mullins passed for 257 yards and two touchdowns, and ran for another score against Oakton on Oct. 19.

Chantilly — Devon Burns’ first touchdown was a display of balance. His second score was a flash of speed.

The Westfield receiver exhibited his arsenal of athleticism to the tune of 186 yards and two touchdowns on Oct. 19 as the Bulldogs defeated Oakton, 28-14, during a Concorde District football matchup at Westfield High School.

With the score tied, 7-7, in the opening quarter, Westfield quarterback Chris Mullins threw a short pass to Burns on the right side of the field. An Oakton defender hit Burns near the sideline, but the Bulldog playmaker managed to stay in bounds and sprinted into the end zone for a 47-yard touchdown.

"I caught the ball, ran down the field [and] as I put my shoulder down in to him, I saw him duck his head," Burns said. "That’s when I moved my feet … and then I was gone."

Westfield was backed up at its own 4-yard line midway through the second quarter when Mullins connected with a wide-open Burns, who raced down the field for a 96-yard touchdown, helping give the Bulldogs a 21-7 advantage.

"We run the ball well and people can put a lot of guys in the box to try to stop that, but if you’ve got a guy that you’ve got to fear like Devon, then that helps a lot because he can make you pay," Westfield head coach Kyle Simmons said. "If the safety is coming down into the box on play action, they can’t catch back up with [Burns]. It’s big."

"We run the ball well and people can put a lot of guys in the box to try to stop that, but if you’ve got a guy that you’ve got to fear like Devon, then that helps a lot because he can make you pay."

Burns, a junior transfer from Freedom High School in South Riding, finished with four receptions and helped Westfield improve to 8-0, including 3-0 in the Concorde District. Mullins finished 7-of-13 for 257 yards, one touchdown and one interception. He also scored a rushing touchdown. Dalaun Richardson led the Bulldogs’ ground attack with 17 carries for 93 yards and a score.

While the Westfield offense came up with big plays, the Bulldogs’ bend-but-don’t-break defense surrendered more than 400 yards to the Oakton offense, but limited to the Cougars to 14 points.

Oakton quarterback Kyle Downer totaled 255 yards of offense in a loss to Westfield on Oct. 19.

"The stats aren’t going to be pretty for our defense," Simmons said. "It was funny, I was telling them a story about our 2007 team against Oscar Smith [in the state semifinals] and how we gave up something like 500-and-some yards passing, broke state records and whatnot, but we won the game. It’s not about how many yards the other teams gets.

"It doesn’t always feel good and it’s not pretty, but what’s the score at the end of the game? We have that kind of defense this year: they’ve got to get stops at the right time. We talk about make [an opponent] keep snapping it again and hopefully they’ll make a mistake somewhere down the line."

Oakton was able to move the ball and pile up the yards. Quarterback Kyle Downer carried 24 times for 161 yards and a touchdown. He also completed 13 of 23 passes for 94 yards and was intercepted once. Running back Mike Wandey had 13 carries for 98 yards a touchdown. The Cougars finished with 401 yards of total offense, including 307 on the ground. However, the Oakton offense ran 19 plays from inside the Westfield 30-yard line, but managed just one touchdown --- a 7-yard run by Downer in the third quarter. The Cougars’ other score came on a 35-yard run by Wandey in the first quarter.

Trailing 21-7, Oakton moved the ball to the Westfield 6 on the final drive of the second quarter, but threw an interception in the end zone on the final play of the first half. The drive lasted 17 plays, covered 89 yards and chewed up 7 minutes and 22 seconds, but produced no points.

"Offensively, we felt great about the way we moved the ball and were able to put long drives on Westfield's defense. We needed to improve in the red zone."

After Downer’s touchdown cut Westfield’s lead to 21-14 with 8:31 remaining in the third quarter, Oakton got the ball back two plays later when Bobby Lam snagged an interception at the Westfield 31. The Cougars would drive to the Bulldogs 19, but Oakton missed a 36-yard field goal attempt.

Trailing 28-14, Oakton took over on its own 20 with 10:54 remaining in the fourth quarter. The Cougars moved the ball 56 yards in 13 plays, using more than six minutes, but turned the ball over on downs at the Westfield 24.

"Offensively, we felt great about the way we moved the ball and were able to put long drives on Westfield's defense," Downer wrote in an email. "We needed to improve in the red zone. After the interception, our defense gave us great field position and we needed to capitalize. …

"We did a couple things to stop ourselves when we got close to scoring. The [Westfield] defense also tightened knowing their backs were against the wall. There is a smaller margin for error the closer and closer you get to the goal line and we did not capitalize."

Oakton running back Mike Wandey dives for the end zone against Westfield on Oct. 19.

Oakton dropped to 6-2, including 1-2 in the Concorde District. The Cougars won their first six games, but those opponents have a combined record of 17-31, and only Madison (7-1) has a winning record. Since then, Oakton has lost to district foes Chantilly (42-21 on Oct. 12) and Westfield.

"I think [entering] the Chantilly game, we had not faced very tough competition in a couple weeks and we were caught off guard," Downer wrote. "We really killed ourselves in that game, giving up five turnovers. With how poorly we [took care of] the ball, we still managed to out-gain Chantilly in terms of yards, which showed us how we really hurt ourselves.

"Last Friday, we knew what to expect and matched up punch for punch with Westfield. A few plays here and there and we easily could have come out on the other end. I think we realize the fine difference between district opponents now and what it takes to win in the district."

"In the Concorde District, we come together as a family even more," Burns said. "We come out here, we execute [and] we do everything we have to do. The main subject is do your job and that’s what everybody does on our team."