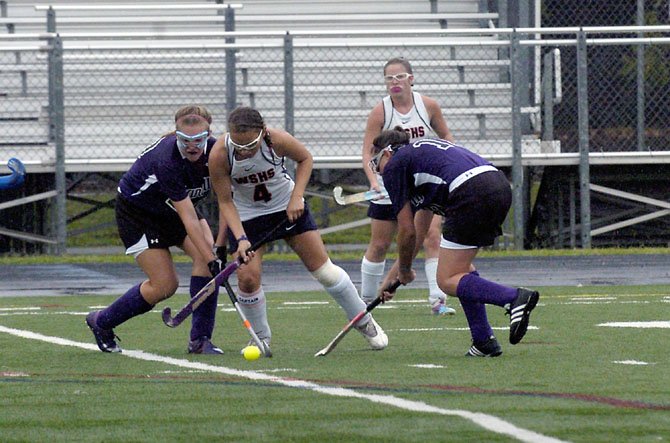 West Springfield senior Tasy Novopachennaia battles for the ball against two Chantilly players during the “Under the Lights” field hockey tournament on Aug. 25 at Lee High School. Photo by Craig Sterbutzel.

The West Springfield field hockey team is in search of its first district championship since 1973. While the Patriot District tournament is more than five weeks away, the Spartans started their journey by winning four of their first six games, including a 2-1-1 performance at the “Under the Lights” tournament Aug. 24-25 at Lee High School.

After beating Mount Vernon at home, 2-0, during its season opener on Aug. 22, West Springfield opened its “Under the Lights” competition with a 6-1 victory against Thomas Jefferson on Aug. 24. Natalie Ha scored a pair of goals for the Spartans, and Casey Nelson, Tasy Novopachennaia, Brittan Muir and Kara Kachejian each scored one. Later in the day, West Springfield tied Mount Vernon, 1-1, in a rematch with the Majors. Novopachennaia scored the Spartans’ lone goal.

“The first game we did very well,” Donaldson said. “…The second game didn’t go as well as I would have liked it to go. I think we need to adjust on the grass—we practice on turf and we play on turf—we need to adjust on grass and we just didn’t do that very well. We played well enough—we didn’t lose—but I think we have to learn how to adjust a little better because we are going to face some teams on grass this year.”

West Springfield will travel to face Stuart at 7:30 p.m. on Friday, Aug. 31. The Spartans will open Patriot District competition at home against Lake Braddock on Sept. 10.