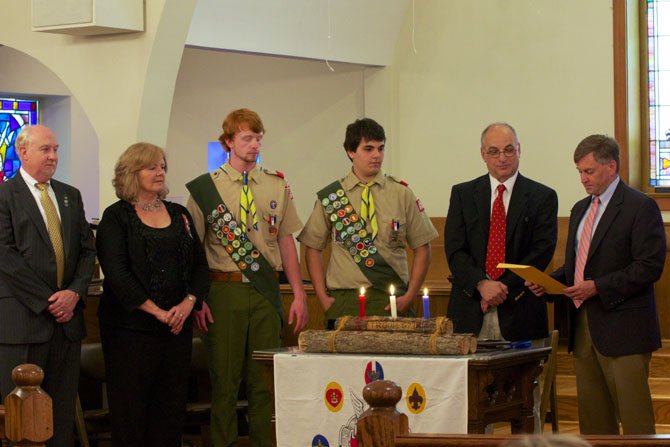 Michael “Mikey” Porrazzo, son of Michael Porrazzo of Great Falls, joined Boy Scout Troop 673 in 2005. Since joining the troop, Mikey has participated in numerous backpacking, biking, and other trips and completed the Triple Crown of High Adventure trips: Northern Tier in 2008, Sea Base in 2009, and Philmont in 2011. He has served in various leadership positions in the troop including patrol leader, historian, and quartermaster. He has also earned numerous Fifty Miler awards and the Junior Shooting Team USA award.

For his Eagle Project, Mikey led a group of scouts and adults in rerouting a 400 foot section of hiking and horseback trail in Seneca Park in Great Falls. Part of the trail crossed over a creek bed and Mikey directed the group in laying two layers of riverstone across the creek bed to make it easier and safer to cross under slick conditions.

Mikey, a recent graduate of Langley High School, plans to attend the two year automotive program at Northern Virginia Community College and work in the automotive industry in the fall. “I have not ever had such a good time or memories with a better group of guys,” said Mikey of his adventures with the troop.

Stephen Glenn Smeds, son of Glenn and Kathy Smeds of Great Falls, joined Troop 673 in 2005, after earning the rank of Arrow of Light as a Cub Scout. Troop 673, sponsored by the Great Falls United Methodist Men, has produced over a hundred Eagle Scouts, including Stephen’s older brothers Derek, Gary, and Craig Smeds.

Since joining the troop, Stephen has served as senior patrol leader, troop guide, and several times as patrol leader. In addition to attending numerous scout summer camps, Stephen has attended the Bahamas Sea Base and Philmont Scout Ranch high adventure trips. Stephen was inducted into the Order of the Arrow, considered Scouting's National Honor Society, in 2008.

For his Eagle Project, Stephen constructed two benches for the Andrew Chapel Pre-School to provide a comfortable seating area for the teachers to safely observe the children playing. This playground is used by the pre-school, the church and the community.

While attending Langley High School, Stephen participated as a member of the track team. Recently graduated, Stephen will attend West Virginia University in the Criminology program in the fall.