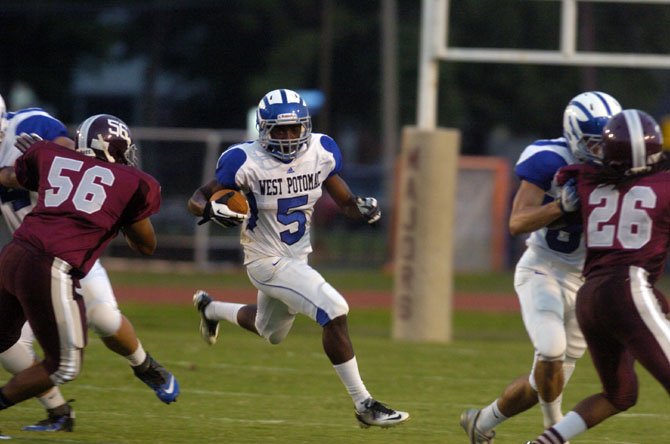 The West Potomac football team entered its 2012 season opener with a new head coach, new quarterback and new offense. Regardless, the Wolverines produced a familiar result against rival Mount Vernon.

West Potomac defeated Mount Vernon, 34-7, on Aug. 30 at MHVS, extending the program’s winning streak against the Majors to six games. During the last four seasons, the Wolverines have outscored the Majors by a total of 182-37.

West Potomac built a 17-0 lead, thanks to a pair of touchdown runs by Demornay Pierson-El, before Mount Vernon scored its lone touchdown on a 19-yard pass from quarterback Brendon Maturey to Robert Decardi-Nelson with eight seconds remaining in the first half. In the second half, West Potomac kicker Chris Blewitt connected on a 37-yard field goal, quarterback Caleb Williams threw a touchdown pass to James Harkless and Tommy Peters blocked a Mount Vernon punt, which was recovered by Glenn Rushing for a touchdown.

"I thought the kids played tentative in the first half," third-year Mount Vernon head coach Barry Wells said. "[I] still haven’t solved the code on what happens when we line up against these guys. I personally don’t believe they’re 27 points better than us."

For Jeremiah Davis, the victory was his first as West Potomac head coach. Davis, who played defensive end at Annandale (class of 2000) and Penn State before coaching for seven years as an assistant with the Atoms, took over for Eric Henderson, who is now the defensive coordinator at Lake Braddock.

Williams, a senior, completed 6 of 9 passes for 85 yards and a touchdown in his first varsity start at quarterback. He also rushed seven times for 19 yards. Williams played quarterback for the JV last year but said he had planned on playing running back or receiver this year. Caleb Henderson was a second-team all-region performer at quarterback for the Wolverines as a sophomore in 2011. However, Henderson transferred to Lake Braddock at the end of the 2011-12 school year, leaving the quarterback position open.

"He does a great job managing the game," Davis said about Williams. "He took the bull by the horns early on in the summer time. We said ‘You want to play quarterback?’ [He said], ‘All right, I’m your quarterback.’ I met him at a meeting, [he] shook my hand and was a stand-up guy and I said this is our guy. … He’s big, he’s physical and he runs well."

Williams said he doesn’t pay attention to any talk about his role in taking over for Henderson.

"I just kind of blocked it out," he said. "I’ve got a team here that needs me, so I just stepped up [in] the leadership role."

Mount Vernon receiver Robert Decardi-Nelson catches a touchdown pass in the final seconds of the first half against West Potomac on Aug. 30.

Helping Williams on offense is the junior Pierson-El. After primarily playing receiver in West Potomac’s spread offense last year, Pierson-El is seeing more time at running back in an offense that looks to spend "60 percent" of its plays under center, Davis said.

Pierson-El carried 10 times for 114 yards and two touchdowns and caught two passes for 16 yards, but said he still needs time to adjust to the new offense.

"I’m a little uncomfortable with it, but I know with reps I’ll get … used to it," Pierson-El said. "I’m just looking forward to getting reps in practice."

On defense, Harkless had an interception and Peters had a sack for West Potomac.

"It feels good," Williams said after beating rival Mount Vernon. "Twitter, Facebook, phone, all that — [the Majors] talk, so we had to come out here and beat them. Now we have bragging rights."