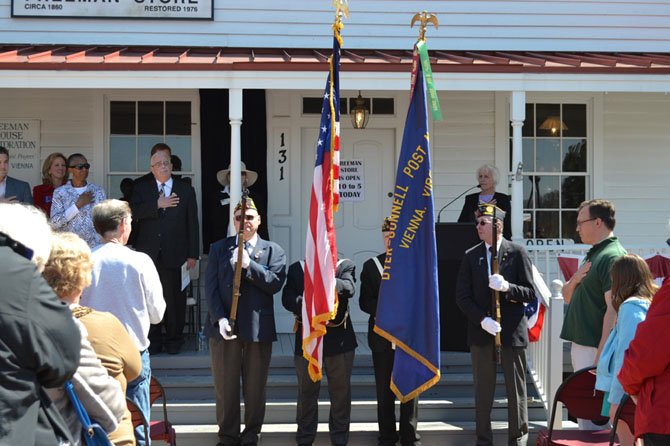 Members of the American Legion 17th District Honor Guard presented the colors at the Saturday, April 6, unveiling of the plaque at Vienna’s Freeman Store building marking its inclusion into the National Register of Historic Places. Photo by Lori Baker. 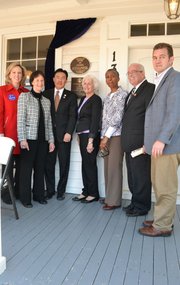 He reminded visitors of the important role that The Freeman Store played in history. Many know that the building changed hands several times during the Civil War. It served as a military hospital, and as a military station for both the Union and the Confederacy. But many may not know that even after Appomattox, the building was used by the military, explained Connolly. The man who killed Lincoln’s assassin, John Wilkes Booth, was stationed at the Freeman Store.

John Vrana played the part of Abram Lydecker, original landowner and merchant of the property, which was then called Lydecker Store. “The land was cheap, it had good soils and climate, and a wonderful market of government people in the city of Washington. In the 1850s this was a booming area,” he said.

Boston Corbett was sent out with a company of men to hunt Booth down. He eventually found him, shot him, and Booth died a few hours later. Corbett then returned to his station at the Freeman Store.

The store was also the site of one of the secessionist votes. State Sen. Chap Petersen (D-34) explained that when the new state that became West Virginia broke away from Virginia, both Fairfax and Loudon counties were on the original map to be included with the new state. But in the end, the new state legislature decided not to include them.

Vienna resident Bonnie Salzberg brought her daughter Abigail to the festivities. Abigail is a fifth grader who “loves the store,” said Salzberg. “We’re here all the time,” she said. “You just feel like you’re a part of the community.”

The Freeman Store, which is an exact replica of how the building looked 154 years ago, was open all day for tours on Saturday. There was also a traveling Civil War History Mobile on site for those who wished to learn more about Virginia’s Civil War sesquicentennial.

“This is a wonderful community event bringing our history alive for all of the young people here,” said Del. Barbara Comstock (R-34).