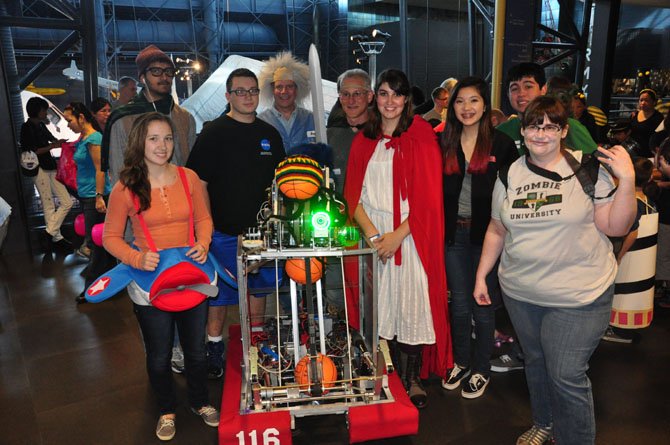 The Herndon High School Robotics team, pictures at an outreach event last year, will compete in a championship event in St. Louis this month. Photo by Alex McVeigh.

Herndon — The Herndon High School Robotics team gained several accolades at the FIRST (For Inspiration and Recognition of Science and Technology) regional robotics competition, punching their ticket for the world championships in St. Louis, Mo., this month.

Each January the national competition kicks off with a description of the tasks the team’s robot must perform. This year’s required the robot to throw Frisbees and climb a metal pyramid. The more accurate the throws and the higher the robot can climb on the pyramid, the more points they receive.

“It’s pretty daunting, especially the climbing portion. These are heavy robots and there’s not much for them to hold onto,” said team member Matthew Lee. “We focused more on shooting the Frisbees and playing defense against other teams.”

THE TEAM had a rough showing in the first regional competition of the season.

Abigail Ackerman, the team captain, said they took away several specific fixes from the Raleigh competition.

“We took about 30 pounds off the robot, and upgraded the intake hopper for the Frisbees,” she said. “It didn’t work so well in the first competition, and if the discs came in upside down it wouldn’t work at all.”

The team also worked on refining the robot’s accuracy.

“Part of our changes between Raleigh and D.C. was to play around with the shooting mechanism to increase accuracy,” said sophomore Danny Vedova, the team’s cocaptain. “We figured after making the fixes we’d be in for at least a top 10 finish in D.C.”

The team finished second place out of 59 teams at the Washington, D.C. competition. Last year at the St. Louis event the team finished 44th out of their division of 100 teams.

“We’re hoping for better this year,” Ackerman said. “We usually try to do two regionals every year, and a national event every other year, but with our award getting us a spot in St. Louis we’ve got a third event.”

The team also took home the Engineering Inspiration Award for their outreach efforts in the local community and beyond. They sponsor a team in Israel, sending batteries and other supplies. Students also designed a coloring book and created a book of poetry as part of their outreach efforts.

“We’re not among the most flashy teams in the competitions, but the students focus a lot on their different outreach activities, which makes a big impact,” said Heidi Foster, one of the team’s mentors. “It’s part of FIRST’s efforts to change the culture, to make STEM activities as popular as sports, and with the books we’re trying to appeal to students who are interested in arts and literature.”

Foster said one of the judges in Washington, D.C. told the presenter that the designers of the coloring book should “stop what you’re doing and enroll in art school right now.”

ONCE THE COMPETITION in St. Louis is over, the team will turn to preparing for its annual outreach events. They have an annual display at the Herndon Festival, will be at the Herndon Relay for Life the weekend after the festival and are looking into setting up a display at the Friday Night Live concert series this summer.

The World Championships will take place from April 25 to 27. The team is still seeking sponsorships to fund their trip. For information about sponsorships, email Lee at matthew.james.lee703@gmail.com.