New Home for Turtles at Riverbend 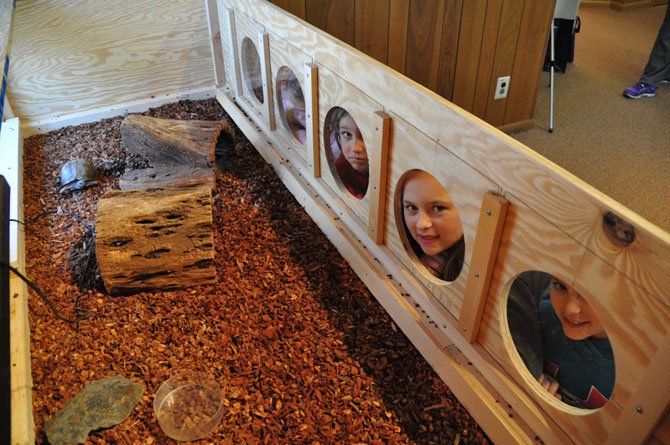 Great Falls — Young visitors to the Riverbend Park Nature Center used to have a hard time looking at the three box turtles in the turtle habitat. The old habitat featured a solid wood wall, meaning children could only look straight down at the turtles and rarely had an opportunity to see more than the tops of their shells. 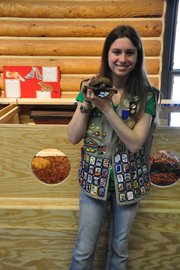 “I went to the park staff looking for a project idea, and they mentioned that they were in need of a new habitat,” said Gilbert, a member of Girl Scout Troop 2659. “A lot of turtles around here are getting hit by cars, attacked by dogs and taken in by people, which causes them to grow harmful bacteria. If they’re released out into the wild again, the bacteria can kill other turtles they come into contact with.”

The three turtles at Riverbend (informally nicknamed Snap, Crackle and Pop by Gilbert) are all handicapped. Two are missing legs, one due to a dog attack and one injured by a lawnmower, and the third has a cracked shell after getting hit by a car.

“It always seemed like there were a lot more turtles around when I was younger, but before the project I didn’t realize just how much the numbers in the area were going down,” Gilbert said.

The new habitat is bigger than the previous one, and contains several round portholes in the side, allowing visitors a chance to see the turtles up close and eye level.

“It was nice to be able to see their faces and how they react when people are looking,” said Becky Landau, 6. “It’s sad to see what’s happened to these turtles, I’m glad they’re safe here. Hopefully these kinds of things won’t happen when people learn about the danger they’re in.”

Gilbert raised the approximately $500 needed for her project from local businesses in Great Falls, who donated money or items which she used for a fundraising raffle. Part of the project also included pamphlets with information about turtle species in the park and new signs posted advising people on the proper way to deal with turtles if found.

“I’m glad to see those new signs about the turtle situation, I had no idea that they were in such danger,” said Brad Shepherd, who spent part of Saturday hiking through the park. “It seems like the harm being done to them is very avoidable, so hopefully the awareness leads to much greater numbers and better overall health.”

Gilbert has long had affection for Riverbend’s Nature Center, having seen a snake-feeding demonstration when she was young.