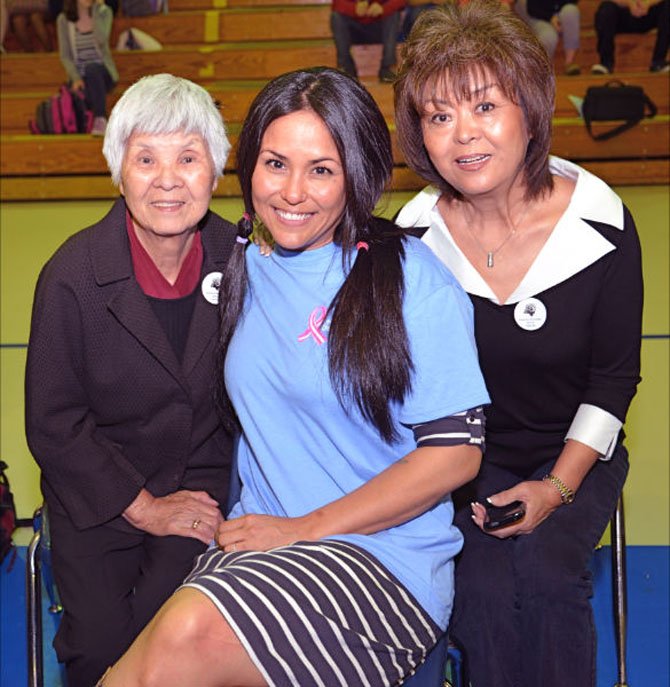 Before, from left: Grandmother Mieko Oliver, Robinson Drama teacher Amy Hand, and her mother June Hand of Springfield pose for a pre-cut family portrait. Amy Hand made the decision to add her hair to the Acts of Kindness for cancer patients in honor of her grandmother, a survivor of recent cancer. Photo by Andrea Worker. 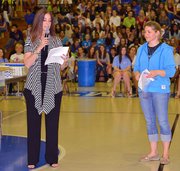 Del. Eileen Filler-Corn (D- 41) presents the proclamation for a Virginia Lottery Super Teach 2012 Award to special education teacher Megan Gaeta at the 26 Acts of Kindness Assembly at Robinson Secondary School. Gaeta’s class and the students who partner with them have donated countless hours of energy and time toward charitable activities like their Packaged With Care program.

April 1st marked the beginning of Robinson Secondary School’s “26 Acts of Kindness”—a tribute to the 26 children and adults who were killed at the Sandy Hook Elementary School shooting last December in Newtown, Conn. The Student Government Association (SGA) pulled out all the stops to make this “pay it forward” campaign a success, even providing t-shirts with space on the back for supporters to fill in each act of kindness performed, producing a promotional video that was uploaded to YouTube, and even establishing a Twitter site where do-gooders could post what good deeds they had done.

On Friday, April 12, the school took their kindness to the next level at a school assembly where 66 students and staff had some serious hair cuts—donating the lopped off locks to the charity Pantene Beautiful Lengths to make wigs for cancer patients.

Ninth grader Savannah Willet of Clifton shows off her bag of donated hair. Her mom Megan Dygve sits beside her, having made the first cut. Savannah has been growing those lustrous locks since third grade.

BEFORE THE CUTTING commenced, Special Education teacher Megan Gaeta, the organizer of this charitable contribution, received a special proclamation from Del. Eileen Filler-Corn (D-41) honoring the educator’s receipt of a 2012 Virginia Lottery Super Teacher Award. The proclamation noted Gaeta’s work with her special needs students who, in partnership with other Robinson students, created the school’s Packaged With Care program. Together, the students with and without special needs raise funds, then shop for supplies for community members in need, bringing hygiene supplies to shelters, school supplies for children, even crafts for hospitalized children.

The assembly then heard from Associate Principal Mike Mukai, who told the personal tale of how he had come to be the adopted parent of a 14-year-old boy when he himself was just a single 25-year-old, with only three years of teaching experience to his name. “People always say ‘Wow, Mike, how you changed that boy’s life!’” said Mukai. “It’s really more the other way around. You do change lives with every act of kindness, but every act of kindness really changes your life—for the better.”

The gathering was also inspired by Michael Ricucci, president and CEO of TerraRising Records, who told his own motivational story and spoke of his company’s work to promote music therapy and support music education programs.

Freshman Kaitlin Wade of Fairfax admitted to a few tears and needed the support of freshman friend Margaret Hanover of Burke to get the hair donation job done. “It does feel lighter!” said Wade.

There was some comic relief in the form of a student “fill the packages for those in need” relay race, and then the scissors finally came out. Several hair styling teams, including a group from the Paul Mitchell School in Tysons Corner, donated their time and talent for the event. Many of the donors had a family member or friend make the first few cuts before the professionals took over and gave the newly shorn hair some style and shape. Some of the girls had been growing those tresses for years, so it was no surprise when a few tears were shed to the sound of the snipping and the donations were finally zipped into plastic bags.

ROBINSON’S 26 ACTS OF KINDNESS campaign will end officially on April 26 when all of those t-shirt-wearing, kindness-pledging students gather to take a group panoramic photograph to send to Sandy Hook Elementary school, along with the story of their crusade to give kindness a place in daily life. Sixty-six new hairstyles walking the school halls will act as a daily reminder toward that goal.