If there is a way to get the message out there, the 26 Acts of Kindness Robinson SGA Committee will find it—and use it. Photo by Andrea Worker.

“You don’t know what even the smallest act of kindness might mean to someone.“

—Shannon Lopynski, a senior, of Clifton

“Oh, no, we’re going for them all!” declared the eight students who form the 26 Acts of Kindness SGA Committee. They have already run out of the custom-made t-shirts that read “26 Acts of Kindness” on the front and contain 26 lines on the back for each wearer to fill in daily between the 1st and the 26th of April with their participatory kindness (not to worry, more on the way!) 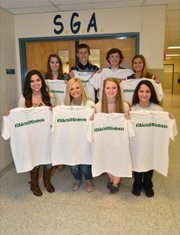 The number 26 is in honor of the 20 students and six staffers who were killed during the tragic Sandy Hook Elementary School shooting on Dec. 14 last year in Newtown, Conn. One of those lost lives belonged to Lauren Rousseau, cousin of Robinson Student Services Counselor Kirsten Wiley. Sophomore committee member RJ Holtzman said, “That connection just made us even more determined to do this right. Ms. Wiley means a lot to all of us. She’s really a beloved counselor to so many of the kids here. Maybe this can make her feel just a little better, and we’ve already done one act of kindness then.”

THE IDEA of performing 26 Acts of Kindness to honor the Sandy Hook victims was proposed in an article and via Twitter by NBC news correspondent Ann Curry and quickly went viral. The kids at Robinson are taking it to a new level and making sure that neither the victims, nor the notion of remembering them by spreading kindness, gets lost in the noise of the next news cycle.

To get things started, the SGA crew produced a video that was made available to the entire student body and later uploaded to YouTube. Twenty-six students and members of the school’s staff, captured in poignant black and white, were filmed throughout the campus, each holding the picture of one of the Sandy Hook victims. In the video, each picture is slowly turned to reveal an Act of Kindness that had been performed by the participant in memory of the lost person whose image they carry.

“We worked on that video for months,” said Jessie Bond, a senior from Fairfax Station. “Not just because it was technically difficult, but because we wanted to respect the victims and we wanted to make something that would show people how important kindness is.”

Daniel Clements and Alison Neun co-sponsor the SGA class at Robinson: Clements teaches science and Neun is in special education.

“You don’t know what even the smallest act of kindness might mean to someone,” added Shannon Lopynski, a senior and resident of Clifton.

Next on the agenda was a Pledge Banner that accompanied talks about the project. The banner now takes up the back of the SGA’s classroom, filled with signatures and even a painted handprint or two.

The T-shirts serve several purposes. “One of the goals of the SGA,” said Autumn Guckert, “is to promote unity among the students at Robinson. On the last day of our 26 Acts of Kindness challenge, we plan to get everybody together for a giant panoramic photo, all wearing their filled-in kindness t-shirts. What a way to show how all of us at Robinson pulled together to make a difference. Every time someone wears one of those shirts, the message gets broadcast again, maybe inspiring someone else to do something on their own.”

The students plan to send the photo along with a story about their efforts and with words of encouragement to Sandy Hook Elementary. “And, of course,” said Will Rowson, a sophomore from Fairfax sounding very much like the next generation’s business leader, “you know that things that get written and recorded are the things that get done.” 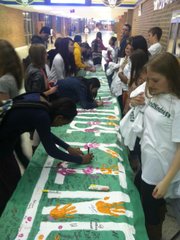 Robinson students signing the Pledge Banner while participating in the 26 Acts of Kindness campaign.

Guckert also knows how to work the press and the social media avenues to get the message out. The junior from Clifton contacted several media sources, including the Connection Newspapers and the local NBC affiliate. “It’s not about recognition for us,” said Guckert. “It’s a way to take this effort to a larger audience, even beyond the walls of Robinson.” The group was amazed that their 26 Acts of Kindness Twitter account “exploded on April 1st,” as Shannon Lopynski described it. “We started the day with 20 followers. Before the end of the day we were over 200.” At last check, there were 600-plus following the postings that good deed-doers were reporting. A browse through that Twitter log shows students and staff and friends and relatives excitedly adding their efforts to the quickly expanding list. “I made dinner for my family last night,” read one tweet. “I am writing Thank You notes to teachers.” “I made a donation to Autism Speaks.” “I just helped our janitor clean up a mess—and thanked her for what she does!” “I bought a Starbuck’s for the stranger in line behind me!” Scrolling down, good deeds, big and small, keep adding up.

“Sixty-two students will be cutting their hair to donate to Pantene’s Beautiful Lengths program that collects human hair to produce wigs for cancer patients,” said Alison Neun. Neun is a special education teacher at Robinson and the teacher co-sponsor of the SGA along with Daniel Clements, who teaches science. Neun and Clements both commented on how proud they were to be associated with the SGA. “All of them,” said Clements. “They all participate,” commented Neun. “They all support each other and the individual projects and campaigns they are working on. And they support the entire school by leadership and showing up for events, games, performances, everything across all stereotypical boundaries.”

ROBINSON’S 26 ACTS OF KINDNESS campaign will come to its official close on April 26th, but if the members of the Student Government Association and the troops they have rallied throughout the school have anything to say about it, that date will not mark the end of the story—just the first chapter of a long series. Check out their YouTube video (search for 26 Acts of Kindness Robinson) and watch the good deeds multiply on their Twitter space at twitter.com/26Acts_Kindness.