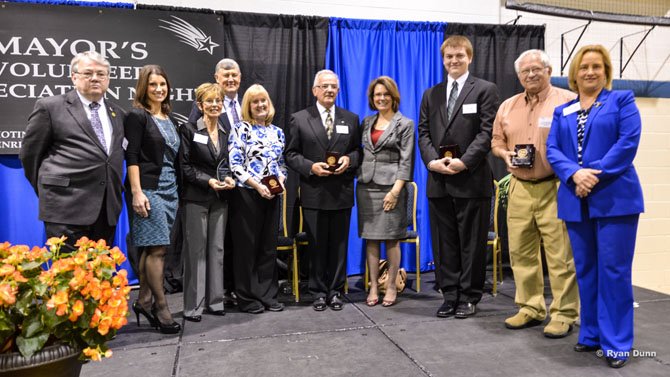 “Here in Herndon, 447 people were nominated by more than 38 groups as Outstanding Volunteers. Their contributions range from youth sports and scouting to community service and civic activities,” said Mayor Lisa C. Merkel.

“National Volunteer Week is a time to celebrate people doing extraordinary things through service,” said Merkel. “This year’s theme, ‘Celebrate Service,’ captures the meaning of this signature week, honoring the people who dedicate themselves to taking action and solving problems in their communities.” 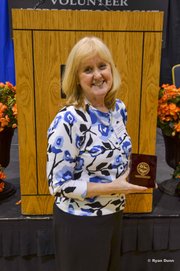 Merkel referenced the community response in Massachusetts after the Boston bombing. “I am confident we would equally rise to the occasion whenever a neighbor is in need. … We celebrate the profound impact of volunteers.”

GUEST SPEAKER Julie Carey, News4 reporter and Northern Virginia bureau chief, recounted times when she had been a part of volunteer activity in her community. Carey brought up a quote used by the Herndon Rotary Club, “We may do something to help others but in return we get something back.”

“The Distinguished Corporate Service Award was added last year to honor a business or corporation that has contributed to the town through outstanding commitment to or promotion of the town for the greater good of Herndon,” said Merkel. This was year the award was presented to Griffin Owens Insurance and its owners Chris Griffin and Don Owens.

The Distinguished Volunteer is the highest level of recognition awarded in the Town of Herndon, presented to individuals who have demonstrated levels of service over several years or in projects requiring leadership, service and effort.

The first awardee was Ivan Young. A volunteer at the Herndon Enrichment Program, Young has spent over ten years assisting Reston Interfaith and helping the food pantry staff with the Thanksgiving food drive. “We are grateful for Ivan,” said Abby Kimble, director of communications and outreach for Reston Interfaith.

The second Distinguished Service Award was presented to a Herndon Rotary club member Rudy Tassara who raised almost $10,000 for the club’s youth scholarship funds. He then helped raise an additional $4,000 for scholarships awarded to Herndon youth.

The third award was presented to Robin Carroll for her work as president and executive director of the Herndon Foundation for the Cultural Arts. “I am hopeful that people will learn more about art activity in Herndon and the ArtSpace as well as our process of moving towards an official center for the performing and visual arts,” said Carroll.

“As a 17 year old junior at Herndon High School, this gentleman had years of volunteer experience to his credit. … When the Friends of Runnymede Park chose not to hold Naturefest last fall, he [Alger] took it upon himself to ensure that an event happened in the park.” Alger’s work helped nearly 4,000 people enjoy a day of hands on activity and education regarding wildlife and the natural world.