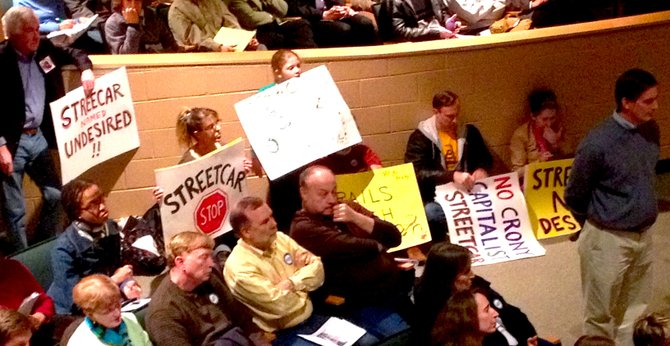 Opposition to the streetcar line waits to speak against the project. Photo by Michael Lee Pope.

Plans for Arlington officials to receive federal money for a proposed $250 million streetcar line have been derailed, although county leaders say they are pressing ahead anyway. Meanwhile, critics of the proposed streetcar system are calling for an independent cost-benefit analysis that compares a bus-rapid transit system to a streetcar line.

"We've done the analysis. We've done all the studies that need to be done," said County Board Chairman Walter Tejada. "And if there is anything else, we will take a look at it down the line."

Critics say that's not true. Although a return-on-investment study was conducted as part of an alternatives analysis, those who are calling for an independent cost-benefit analysis say that's not adequate. They say they would like to see a side-by-side analysis showing economic development benefits of a bus-rapid transit system compared to a streetcar line. Newly elected County Board member Libby Garvey said citizens are still missing a complete financial picture.

"There are some statements made that, on just sort of general survey data, how people feel about buses and there are little pie charts there," said Garvey. "There's not real data there at all."

THE PROPOSED STREETCAR line has created sharp divisions in Arlington County, even among members of the Arlington Democratic Committee that control the county's politics. Garvey was elected after campaigning against the streetcar. And one of the leading forces of opposition is Peter Rousselot, former party chairman. During a recent forum about the streetcar, he spoke out against the public-private partnership guidelines that were approved by the County Board late last year.

“One of the biggest flaws is that they can approve a multi-million dollar contract to construct the streetcar with no competitive bidding,” Rousselot at the time. “I think that's a tremendous mistake in light of the experiences in other parts of the state.”

County Manager Barbara Donnellan responded by saying that Rousselot's statement was "absolutely untrue." Now county leaders acknowledge that a contract can, in fact, be approved even if Arlington does not receive a second bid. Though a spokeswoman, Donnellan declined repeated requests to be interviewed about her letter to the editor. Instead, she issued a written statement outlining why she believed Rousselot's statement may have been untrue.

"The County took Mr. Rousselot's comments to mean that the County could receive an unsolicited proposal and take it from that stage to contract award without any opportunity for competition," wrote Donnellan.

"They are misinforming the pubic if they are trying to leave the impression that a second bid is required because it's not," said Rousselot. "Whether they are deliberately doing that or accidentally doing it I have no idea."

EARLIER THIS MONTH, the Federal Transit Administration did not include Arlington on a list of projects that might advance forward in the process for receiving funding under the federal Small Starts program in 2014. Supporters of the streetcar line say the federal money would have funded only about 30 percent of the program anyway. More significantly, new money is now available for transportation in part because of the historic funding package approved by Republican Gov. Bob McDonnell.

"We are in a different transportation finance situation than we were when we submitted this application," said County Board member Chris Zimmerman. "We now have funding more than sufficient to cover the Small Starts grant that we had been applying for."

Zimmerman dismissed calls for an independent cost-benefit analysis of bus-rapid transit versus streetcar.

"If you are against the project and you don't want to do it, then you can argue endlessly that there's some study that should be done by somebody else that will produce the results you want."