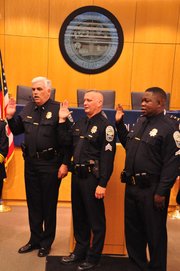 “This ceremony marks the time for these three officers to embrace their changing roles and responsibilities within the community and within our agency,” said Herndon Police Chief Col. Maggie DeBoard. “Now we ask these individuals, as we do with all our HPD leaders, to prepare to lead others on a different level, to help prepare their officers to become extraordinary when the need arises.”

DeBoard also took the time to thank the officers’ families in attendance.

“It is the presence of the families of these officers that makes this event truly meaningful,” she said. “We know they are the ones supporting these officers on a daily basis, and we know how much that support means for their success as a person and in their careers.”

Austin has worked for the department since 2000, serving as a patrol officer for four years before being selected as a K-9 officer, where he has been assigned since. He has certifications as a breath alcohol operator, field training officer and basic and advanced accident reconstruction. He has received the Bronze Medal of Valor, a Life Saving Award and Smooth Operator Award.

Berg has been with the department for 27 years, starting as a patrol officer, moving to the K-9 section and then as supervisor for the property and training section in 2005. He served as the department’s quartermaster, responsible for equipment, hiring and training, managing of the evidence room and supervising crime scene technicians. He has also taught Spanish at police academies throughout the state.

He has been awarded the Commonwealth of Virginia Silver Medal of Valor, the Herndon Police Department’s Bronze Medal of Valor, several meritorious service awards and was the second ever recipient of the Phil Farley Chief’s Award in 2010.

Lt. Jim Moore of the Support Services Division said all three men must now be prepared to serve as leaders and examples to all of their fellow officers.

“Your responsibility as supervisor is to look out for your officers,” said Lt. Jim Moore. “To make sure they’re sharp, focused and provide them with necessary tools and training to perform their job safely and provide the best service possible to the community.”