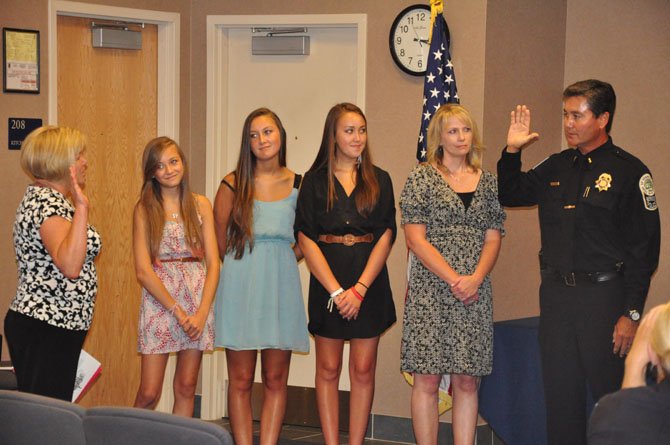 "This is a special day for us because one of our rank and file members is going on to take additional leadership responsibilities," said Capt. Larry Presgrave.

"Twelve years ago, I made a tough decision to leave Arlington County and come to Herndon, but it was the right decision," Moore said. "But I wouldn’t be here at all without the support of my wife and kids."

During his tenure with the HPD, Moore has served as a patrol officer, detective, patrol sergeant and criminal investigations supervisor. He was also named Officer of the Year in 2003.

Herndon Police Chief Maggie DeBoard praised Moore’s attention to detail, communication skills, dedication to the community, exceptional judgment and his commitment to the safety and well-being of the people around him.

"This decision was all about leadership qualities for me," DeBoard said. "Jim now joins the higher rank, which comes with elevated expectations, but I have great confidence he will meet those expectations."

Moore took his oath of office next to his wife Sue and their three daughters. DeBoard made sure to thank them for the support they provided Moore during his career, and in the years to come.

"Jim has worked long hours, sacrificed time with his family and dealt with the daily stress that comes with the job," she said. "This affects him every day, but also his family, sometimes even more. Without their support, he wouldn’t be here."