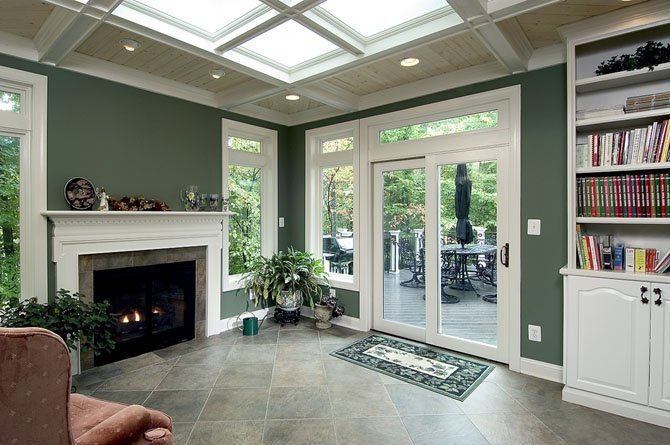 Bringing the outdoors inside: a light-filled sunroom boasting views in all directions opens to a spacious dining deck. The sunroom features a gas fireplace and a custom-designed skylight that fills most of the ceiling. The owners find it an ideal spot for cool weather nature-watching. Greg Hadley

A fire pit adds appreciably to outdoor enjoyment. Cushioned wicker furniture can generally be left outside without cover, so the patio becomes a convenient gathering spot that doesn't require a lot of use-preparation.

If anything in the summer of 2013 points to still evolving homeowner expectations, it may be the frequency with which locals are integrating screen porches, patios, fire pits, and outdoor kitchens into original landscaping schemes that artfully marry the house to its setting.

Gone are the days of minimal outdoor improvements; today’s homeowners are inclined to stay put and express themselves — which is why the traditional house as we’ve known it is becoming more personalized — in short, a home.

“Interestingly, when we started this company in the 1980s our core specialty was opening up views and creating visual continuum, so indoor/outdoor solutions are just a logical extension of what our culture has always been about.”

Although the wooded setting was always a key feature of this custom designed home, the dining deck added by Sun Design Remodeling has become indispensable to how the family now lives and entertains.

Asked about current projects, Durosko said that Fairfax County’s more affluent homeowners are actively seeking to better articulate the relationship of the house and grounds — an impulse which has gradually become a passion for outdoor spaces that can be used in both the hottest days of summer and fall’s chilly nights.

“Homeowners want outdoor rooms — spaces that are wired for entertainment, useable for seven or eight months of the year, and so easy to maintain that the usual repair and replacement tasks are mostly eliminated,” Durosko said. “Naturally, the changes must also enhance the home architecturally.”

To meet a rising criteria, Durosko and colleagues constantly stay on top of a new generation of weather-resistant materials, absorbing and applying fine building techniques that will shape non-traditional materials into designs perfectly suited to the home's style and setting.

And as the standard has risen, so, too, the need to stay ahead of the curve.

Tying a newly-designed outdoor feature to the existing home is fundamentally an architectural proposition, and one that Sun Design's Dawn Parker handles with practiced dexterity.

The sunroom/deck solution to this Oak Hill remodel exits to the wooded setting from two directions. Staircase risers are illuminated.

Starting with a blank canvas — the unadorned rear elevation to a Georgian-style brick home in McLean — Parker imagined a six-sided pavilion, with 10-foot ceilings and sweeping vistas.

The structure would segue from the preexisting sunroom, courtesy of two sets of matching French doors. The white exterior trim is now crowned with a white balustrade visually connected to a columned “arbor trellis” that adds definition to the rear elevation. Since the high-ceiling interior the owners wanted precluded a conventional "pitched" roof — which would have obstructed a second floor window — Parker designed an inverted membrane ceiling that accommodates internal drainage tied into the existing underground system.

Rainspouts are concealed inside the trimmed porch columns and extended, unseen, along the ogee end "eagle head" trellis. The trellis “ends,” in turn, continue as a decorative motif around the top of the porch.

The overall design, as Parker envisioned, perfectly elaborates the home's classic architecture while spotlighting the impressive "English garden" that dominates the backyard. The existing barbecue grill remains steps from either the kitchen or the porch, but now there are multiple dining venues. From the porch, in fact, the owners can keep an eye on the pool when the children are playing.

The patchwork design of the English garden, the old, flagstone patio, the small pond with running water, the crepe myrtles along the property line — all give the setting a refined textural elegance.

A two-level rear elevation solution by Sun Design Remodeling features a 17-foot by 16-foot screen porch with an adjacent grilling deck that segues down a custom-designed split staircase to a lower level patio with custom planters. The project's “built” elements were designed to accommodate extensive landscaping.

“I wanted the whole to look inevitable — as if the design had always been there,” Parker notes. “This is what good architecture is always about.”

“We think of an outdoor living plan is a creative response to an owner's personal requirements,” says Bob Gallagher, whose extensive design/build portfolio extends back some 25 years. “The important point is not how much of it is open or enclosed, but how well the whole supports a lifestyle in which exposure to nature is the primary goal.”

A recent dining decking plus sunroom solution in Oak Hill illustrates the point. After years of occupying a home custom-designed precisely to exploit a pretty wooded setting, the owners had decided they wanted a still stronger link to the outdoors. Low-maintenance was an essential ingredient, but they initially envisioned an “outdoor room,” free from insects — yet with dramatic views in all directions.

“They had looked at screen porches,” Gallagher said. “The idea was an enclosed space on the new dining deck. Something of a place apart. A transitional foot print between house and open air.”

As the conversation developed, however, extending the room's seasonal usefulness gradually became a rising aspiration.

“If we could create a dramatic connectedness to nature and extend the room seasonally, we were heading to the right solution, ” Gallagher said.

At a glance, the resulting 10.5-foot by 12.5-foot sunroom is a neatly balanced space plan that seems neither closed nor overexposed to the elements. Floor-to-ceiling windows define the room on every elevation. Overhead, two skylights installed on a hipped roof allow 25 square feet of natural light. Ceramic tile flooring and other neutral finishes reinforce the natural, open ambiance, which is visually linked to the welcoming dining deck.

To preserve generous views on the existing rear elevation, Gallagher and team placed the sunroom directly off the kitchen to the left of the family room. Built-ins and a fireplace comfortably integrate the space to the existing interior. The room is a favored spot to watch the trees, and mostly opened-up for cross breezes on temperate days.

Since upkeep requirements were to be restricted to an annual pressure wash, even the sunroom's exterior paneling is low-maintenance Hardiboard. Trex decking, aluminum balusters and vinyl-clad posts further an outdoor design scheme that is also easy to maintain.

Sometimes Durosko's first call from a homeowner comes when some weather-exposed part of an existing house has conspicuously failed.

To repair the front facade of a Fairfax home, for instance, Durosko and team replaced a leaking flat roof portico with an architecturally-appropriate alternative that features a concave metal roof. In lieu of the original wood-trimmed front-window, the remodeler called for an aluminum-framed arch-topped window integrated with other exterior elements. For added weather-protection, new portico supports are trimmed in PVC.

Dawn Parker designed a traditional “eagle-head” trellis to help tie a Georgian-style home to its new screen porch. Among other virtues, the decorative element conceals rainspouts. The flagstone patio lends a neutral-but-textured visual support to a colorful garden that includes many old stand trees.

Since a pitched roof would have compromised a view from a second floor window, Dawn Parker designed an “inverted membrane” roof for the six-side pavilion she created for a McLean family. The pavilion is positioned for views of the pool and English gardens.

In the rear, the outdoor living plan called for a 17-foot by 16-foot screen porch and a grilling deck, a ground-level patio and a stand-alone fire pit complete with cushioned wicker couches, table and settee.

“We were tasked with finding the best way to visually rationalize the whole,” Durosko said. “Views and focal points were considered essential to the project's success.”

To keep sightlines from the kitchen uncluttered, for instance, Durosko situated the grilling deck immediately outside the kitchen door, flanking the new screened porch to the right. From the grilling deck, a stairway descends eight steps before arriving at a landing where it splits in two directions.

“A steeper descent would have undermined the project's proportionality,” Durosko said.

At ground level, the staircase reconnects with a semicircular stone planter. Several “built” features were designed to accommodate new landscaping. The curvilinear patio segues to a second platform crowned with an eight-foot stone hearth perfect for fire gazing.

The screen porch, meanwhile, demonstrates how durable materials can be shaped to meet demanding aesthetics. A Trex “transcend” railing with black aluminum balusters was selected since it won't interfere with views by reflecting light. Fiberglass charcoal screen, likewise, preserves an element of privacy.

Keeping uncluttered sightlines from the house was essential to the owners. The spilt staircase design helps maintain an appropriate scale.

Durosko chose paneled Hardiboard for the porch’s inside wall — a neutral backdrop for the wide-screen plasma TV mounted next to a window that serves as a food and beverage pass-through.

Equipped with overhead fans and portable heaters, the porch is habitable in all but the coldest days of winter — an ideal place for fall football games, or almost anything.

“Fairfax County residents are using their outdoor settings more than ever,” said Durosko. “Our job is to show homeowners how to stretch the seasons, and savor nature's changes.”