Performing at All American Bowl
Votes

Performing at All American Bowl

Herndon High School senior Blake Morgan was honored at the school auditorium with the presentation of an All-American Bowl jacket from local soldiers, in the company of friends, family, fellow band mates and students. "We are thrilled Blake is representing us," said Herndon High Band Director Kathleen G. Jacoby. "I think this is a small indication of the type of person Blake is. He is caring and compassionate and always pushing the band to the next level." 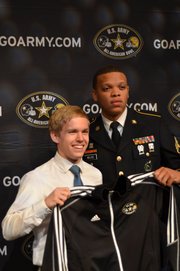 Morgan joins the ranks of an elite group of only 125 musicians and color guard members from across the country who will showcase their talent during a halftime performance at the nationally broadcast U.S. Army All-American Bowl in San Antonio, Texas on Jan. 4, 2014. Band members are selected not just because they excel in music and performance, but because they embody the values of the Army Strong Soldiers like loyalty and integrity. Christine Norton from the All American Games welcomed everyone to the event and introduced guest speakers.

George Mason University Army ROTC Recruiting Operations Officer Matthew Hoover congratulated Morgan and presented him with a ROTC drinking glass. "This is a great partnership we are involved with the US Army and the All American Games to recognize American musical excellence," said Assistant Executive Director with the National Association for Music Education Jane Mell Balek. "It is very competitive and we get applications from students in all 50 states."

Morgan is looking forward to the January performance. "It is a real blast, it will be a highlight of my senior year," said Morgan. "I feel hard work pays off in the long run." After receiving the official American Bowl jacket, Morgan thanked his parents and teachers. "I am glad I could be here," said Morgan. "This is just a reflection of who you guys are," said Jacoby to the audience of students and band members. "I am so proud of you all, good job, Blake!"

The ceremony concluded with a melody by the Herndon High Drumline. Under direction of Kathleen Jacoby, the Herndon High Band has received numerous accolades this year for its musicianship. One of many noteworthy accomplishments is their December trip to Hawaii to march in the 2013 Pearl Harbor Memorial Parade.

To learn more about the Pride of Herndon band, visit http://herndonband.net.