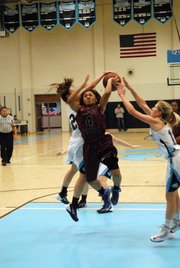 Mount Vernon guard Denisha White has her shot blocked against Centreville on Dec. 3.

If members of the Mount Vernon girls’ basketball team needed a reminder that the Majors lost an abundance of talent and experience to graduation, Tuesday’s season-opener should have done the job.

Mount Vernon head coach Courtney Coffer was not pleased with his team’s effort.

“It’s exactly what I thought: We’re not where we need to be right now,” he said. “… We make the same mistakes over and over and over. We turn the ball over like it’s our job. We don’t execute anything. We don’t like physicality at all, so if we play a team that’s going to be physical with us, we’re going to back down at this point.

“We’ve got a lot of young kids that don’t know how to play basketball at this type of a level. Coming into this game, I knew it was going to be tough because [Centreville] is a good team. This team has state-tournament aspirations coming from the success that they had last year and they return a good piece of that team. For us, it’s the complete opposite. We lost most of our top talent so now we’re trying to rebuild It’s been a struggle. Hopefully the kids don’t get too down.”

Mount Vernon senior guard Chanel Shannon, one of the team’s top scoring threats, led the Majors with six points, but didn’t score her first points until knocking down a jumper nearly three minutes into the second half. With senior point guard DJ JeanPierre out two-to-three weeks with a concussion, Shannon had to pick up some of the slack as a ball distributor. She also had the unenviable task of guarding Centreville’s Green, who finished with 16 points and nine assists.

“It’s exactly what I thought: We’re not where we need to be right now. … We make the same mistakes over and over and over. We turn the ball over like it’s our job. We don’t execute anything.”

“Chanel just had a matchup that, personally, I don’t think she was ready for,” Coffer said. “Jenna Green is the best point guard, to me, [for] public [schools], in this area. William & Mary is getting a special basketball player.”

“Maybe this is a loss that we need,” Coffer said. “We’ve been talking to our kids since Nov. 11, talking to them about ‘You don’t play hard enough. We don’t practice hard. We back down from physicality. We don’t challenge each other in practice.’ We’re telling them to do certain things every day for them to be successful and they refuse to do it. So tonight was a good example (of what can happen). Maybe that’s a good wake-up call for this group … moving forward.”