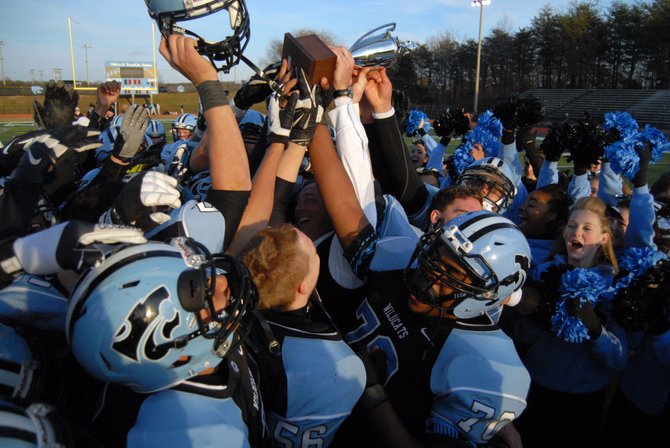 The Centreville football team celebrates beating Westfield for the 6A North region championship on Dec. 7. Photo by Craig Sterbutzel.

Centreville junior A.J. Turner had a rushing touchdown and a receiving touchdown against Westfield in the 6A North final on Dec. 7.

Centreville senior quarterback Scott Walter stood on his home field Saturday afternoon and discussed the Wildcats’ 2011 trip to Charlottesville, when they lost to Oscar Smith in the big-school state championship game.

“I think we goofed off too much two years ago,” said Walter, who traveled with the team as a sophomore but wasn’t a starter. “We weren’t locking in like we needed to against that caliber of a team.”

On Saturday, Walter, now in his second season as Centreville’s starting signal caller, helped the Wildcats earn another shot at a state title.

“We need to lock in right from when we leave this school to go down to Charlottesville,” Walter said, “and we need to get this done.”

Before Centreville could focus on Oscar Smith, the Wildcats had to turn their attention to a Westfield team they defeated 28-0 during the regular season. Centreville led 14-7 at halftime and extended its lead to 14 points on a 25-yard touchdown run by Walter on a fourth-and-1 play with 8:36 remaining in the third quarter. After forcing a turnover on downs, Centreville drove into Westfield territory and faced second-and-9 at the Bulldogs 45-yard line. Walter threw a quick pass to his left to junior A.J. Turner, who raced 45 yards down the sideline for a touchdown and a 28-7 Wildcat advantage.

Turner said Centreville’s season-ending loss to Oakton in the 2012 region semifinals assured the Wildcats would remain focused on the task at hand.

“I think the No. 1 thing was we remember last year, how we lost to Oakton, 14-13,” Turner said. “That was a really sad moment for us and we knew next year it wasn’t going to happen again.”

Walter completed 7 of 11 passes for 107 yards and a touchdown. He also rushed for 102 yards and two scores.

“He (Walter) was excited for today, there was no doubt about it,” Centreville head coach Chris Haddock said. “He’s an experienced kid, he knows when to make checks, he knows when we want to audible and he’s a heck of a player.”

Centreville entered the game having beaten each of its first 13 opponents by at least 20 points, including a 52-27 victory over Stonewall Jackson in the region semifinals. Westfield had two losses, including a 28-0 regular-season defeat against Centreville, and needed an improbable comeback to beat Lake Braddock 19-16 in the other the region semifinal matchup. The Bulldogs trailed 16-3 with less than six minutes left in the fourth quarter when Lake Braddock lined up to attempt a 30-yard field goal. Westfield blocked the kick and safety James Gibson returned it 92 yards for a touchdown. The Bulldogs followed with a defensive stop and scored the tying touchdown and go-ahead extra point with 15 seconds remaining.

Westfield running back Evan Gray rushed for 124 yards and two touchdowns in the 6A North final against Centreville on Dec. 7.

“They had a little magic going last week with their win against Lake Braddock,” Haddock said, “so we were concerned that they might have a little bit of that still.”

“I know they didn’t give up, I’m really proud of them for that,” Westfield head coach Kyle Simmons said about the Bulldogs. “We just didn’t seem to have enough bullets in the gun for a very strong Centreville team. I kept waiting for them to make a mistake and they made very few, so that made it really difficult for us.

“… I read about [Westfield losing multiple region championship games] a lot and people mention it, but how can you feel down about playing your 40th game in three years? That’s pretty cool. I’m proud of the program, I’m proud to be part of it. I don’t like losing and I don’t like losing this game, but if I get here every single year and lose, that’s still a pretty good accomplishment for our football program.”

Centreville took care of business against Westfield. Next challenge: trying to win the program’s first state title since 2000 by beating Oscar Smith.