Local artists and entrepreneurs arrive for Sunday show despite snow. 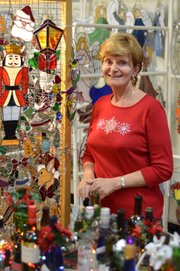 Maggie Des Lauriers brought a selection of wisteria stained glass decorations to the Sunday art and craft fair. A resident of Clifton, Des Lauriers has attended the Herndon Community Center Arts and Crafts Show for many years.

More than 50 local artists came to the Herndon Community Center located at 814 Ferndale Avenue for the 35th Annual Arts and Crafts Show. Kevin L. Mitchell, resident of Fredricksburg arrived with a display of handcrafted wire sculpture figures. "Over the years I discovered my artistic voice, and I started bringing my works to comic conventions this year," said Mitchell. He has a variety of designs in his catalog from sports figures to science fiction themed figures.

A variety of products and merchandise were on display for the one day indoor event. Art Des Lauriers, resident of Clifton, was assisting his wife, Maggie Des Lauriers who made a selection of wisteria stained glass decorations. "I have been doing this show for about 15 years, it is very well organized," said Maggie Des Lauriers.

Reston resident Anna Atkinson had a booth for her homemade candles. Atkinson’s scented candles are handcrafted in Reston, and made of 100 percent beeswax sourced in the USA. "I was living overseas in Sydney, Australia for four years, and I got together with some candlemakers… I really fell in love with the beeswax because it is so natural. I know this fair has been around for awhile so I thought it would be a good one to attend."

Included among the crafts was some confectionary merchandise. "I grew up in the candy making business," said Mary Anne Klank, a resident of Ashburn. Klank and her husband started their business Simply Nut Free Chocolates three years ago in December 2010. "We are a home based business, and we are really lucky to be based in Virginia," said Klank.

Evan Sanderson, resident of Herndon and Stephanie Baker, resident of Sterling, the co-owners of the Boutique Bakeshop, had a booth where they were selling some baked goods. "Now that we have more real estate we have more room to bake," said Baker. Their store, the Boutique Bakeshop is located at 336 Elden Street, Herndon. "We currently have an apple almond tart as our seasonal specialty item," said Baker.

Herndon Community Center Recreation Supervisor David Zakrzewski was on location to help with the event. "We did try to get some more unique artists to this fair," said Zakrzewski. "The weather has been the biggest damper." A snowfall of about an inch did keep some people at bay, and the event closed at 2:30 p.m. because of inclement weather.

Rosemary Faul was helping her husband Michael Faul with his display of merchandise from the pottery business Potter’s Fire. "It is exciting to see the interest in pottery and see all the people come out despite the stormy weather," said Rosemary Faul. "Everyone has been very welcoming of our new business and we look forwards to more shows."

"The turnout is definitely better than I expected," said Jansen De Roxas, a resident of Fairfax. De Roxas is the proprietor of Sweet Bee Boutique, which makes fabric bows, skirts, and accessories made with fun and flirty prints for little and big kids alike. "I started my business in May of this year when my daughter turned one," said De Roxas. Although the weather caused the event to close earlier then planned, De Roxas was not concerned. "I am from Oklahoma, we are used to ice."

To learn more about the Herndon Community Center, visit www.herndonva.gov/Content/Parks_rec/community_center.