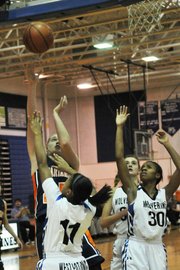 West Springfield guard Amy Berglund grabbed an offensive rebound during the fourth quarter of Tuesday’s game at West Potomac and attempted a putback just a few feet from the basket. The shot rimmed out, leading to a groan from the Spartan crowd.

Berglund, on the other hand, smiled.

Berglund wasn’t happy that she missed a gimmie. But on a night when the Spartan senior was otherwise unstoppable, No. 25 understood the irony in her lone misfire.

Berglund connected on 13 of 14 field-goal attempts and scored a career-high 30 points as the West Springfield girls’ basketball team remained undefeated with an 80-37 victory over West Potomac on Jan. 14.

Berglund, a 5-foot-9 guard, made her first 13 field-goal attempts, eight of which were mid-range jumpers or perimeter shots. She went 2-for-2 from the free-throw line and made both of her 3-point attempts. Berglund’s final attempt after a night of sharpshooting resulted in her missing one of her easier opportunities and receiving a reaction from the crowd.

Berglund, who surpassed 1,000 career points this season, said getting off to a hot start gave her confidence.

“It’s huge,” she said. “If you make your first couple, you feel like you can make any shot.”

West Springfield head coach Bill Gibson said Berglund added the 3-point shot to her arsenal after scoring nearly 400 points as a junior and shooting 52 percent from the floor.

“She has good shot selection,” Gibson said, “and she’s a good shooter.”

“If you make your first couple, you feel like you can make any shot.”

West Springfield twice led by 40 points in the third quarter. Berglund’s three-point play with 3:53 left in the period capped an 8-0 run and gave the Spartans a 52-12 advantage. Less than a minute later, Berglund knocked down a jumper to give West Springfield a 54-14 lead.

Tuesday’s win improved West Springfield’s record to 13-0. Gibson said the maturation of sophomores D’Anna, Haynes and Taylor, who played varsity ball as freshmen, has led to improvement for the Spartans. Last season, West Springfield lost in the Patriot District tournament semifinals, ending its streak of three consecutive district titles. The Spartans finished with a 21-5 record, ending their year with a two-point loss to Centreville in the regional quarterfinals.

“Our team goal has always been to go to states,” Berglund said, “but we’ve got to take it one step at a time.”