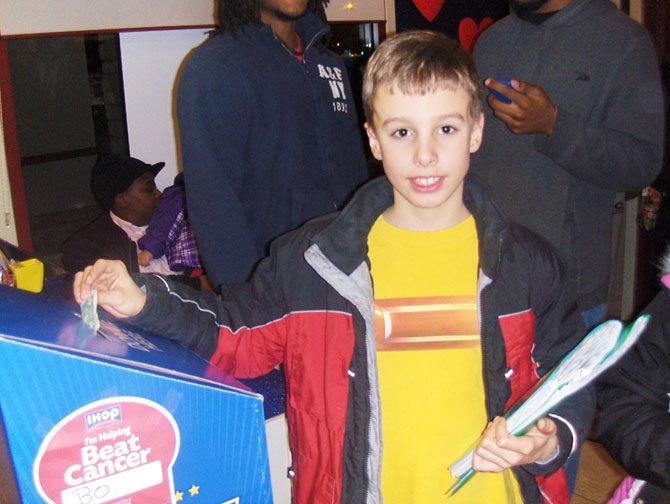 Colin Gegg puts a dollar in the donation box. Photo by Bonnie Hobbs.

Pancakes and syrup make a tasty meal; but at the Centreville IHOP, they’re also a way to raise money. And that’s what happened Feb. 5 when the restaurant held a fundraiser for the Leukemia & Lymphoma Society (LLS).

During IHOP’s National Pancake Day, customers received free, short stacks of pancakes. In return, they were asked to make donations to the charity, and those who did were glad to do so.

“My aunt and grandma had cancer,” said Madeena Aminzay, as she dropped some money into the donation box in the lobby. “And I think, if you have the money, you should help out. Every little bit helps, and it’s for a good cause.”

Sarah Farina, assistant manager at that IHOP, said the restaurant holds a fundraiser every year to support LLS. “The owners’ daughter had leukemia as a kid,” she explained. “So we chose LLS because it’s dear to our hearts and hit close to home.” 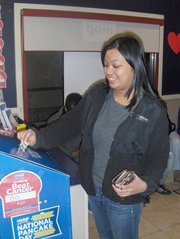 Ticha Romsont makes a contribution to the cause.

That’s why, said Farina, “We’re happy to do whatever we can for this charity. We try to raise more and more money every year.” Besides the Feb. 5 event, she said, “IHOP started collecting donations for LLS the end of December and will continue through the end of February.”

She said 100 percent of the proceeds go to LLS for research and patient financial aid. Farina also has a personal reason for supporting the charity so fiercely. “My cousin had leukemia twice when he was a child,” she said. “So I appreciate the volunteers who come out to help and I thank them all.”

Two of those volunteers working during dinner hours that night were Jean Card and Stuart Moll of McLean. “Everybody’s here for the free pancakes, but we hope they’ll also learn something about the Leukemia & Lymphoma Society,” said Card during the fundraiser. “And most people donate, even if it’s a dollar.”

Brandon Brown and son Myles are happy to contribute to LLS during the Centreville IHOP fundraiser.

Herself a leukemia survivor, Card participates in the Light the Night fundraising walk in Reston each October for the National Capital Chapter of LLS. Last year’s walk in this area raised about $2 million, she said. And for volunteering at the IHOP event, she and the other volunteers receive a credit for their fundraising accounts.

Last year, she and Moll volunteered for this event at the Chantilly IHOP. “We raised a little under $800 there,” said Card. “And we hope to raise as much money as possible tonight.” 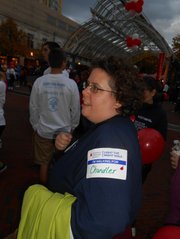 Jean Card, a volunteer for the Leukemia and Lymphoma Society, at the 2012 Light the Night walk in Reston. Card, a leukemia survivor also walks in honor of her cousin, Chandler Benjamin, who was diagnosed with leukemia at 3 years old and is also in remission.

Customers Brandon and Vera Brown brought their three sons, Myles, 13, Marcus, 10, and Kaeden, 6, to the fundraiser. “We wanted to donate to the cause,” said Brandon Brown. “Cancer and leukemia affect everybody. And my mom’s a breast cancer survivor, so it’s something we want to support, contribute to and do our part to help.”

As for Card, it was two years ago this month that she was diagnosed. She’s in remission now and says, “I was incredibly lucky that the kind of leukemia I had was the easiest to treat. So I help because it’s an important cause and it’s important to us to raise money for the research.”

“Without the research to figure out that a particular form and dosage of vitamin A could help me, in my lifetime, my kind of leukemia was 100 percent fatal,” she explained. “So I know the value of research, and I want other people to get those same miracles.”