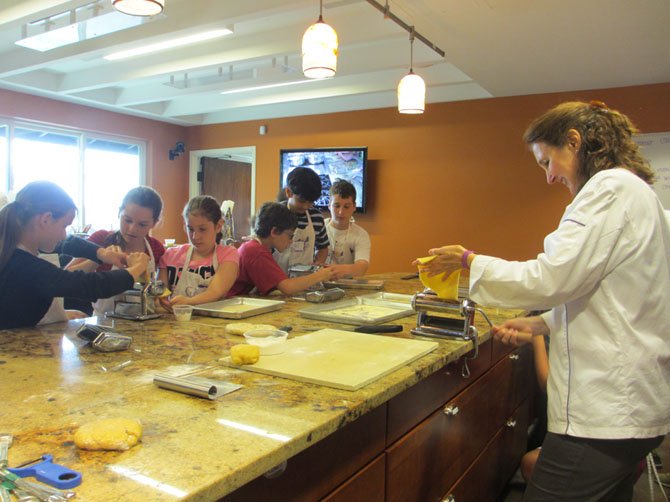 Here’s one thing that Culinaria Cooking School’s summer camp has that no other summer camp around has … food … gourmet food. The culinary campers tour the world in food journeys. And if nine one-week-long camps can fill up for the duration of the summer, it says a lot about the palates of area children.

“A lot of kids are not comfortable in the kitchen,” said Culinaria CEO and co-owner Stephen Sands. “We get these kids doing things, practicing knife skills, food preparation, cooking.

Chefs Stephen Sands and Pete Snaith co-founded Culinaria Cooking School in Vienna about three years ago. Teaching children cooking techniques was part of their original vision for the school.

“This is a good life experience for the kids because it’s something that stays with them for life.”

The morning session on Monday, July 8, hosted the younger kids, aged 9 through 12. They prepared an Italian meal: pizza bianca, pasta sauce, homemade pasta noodles (yes, they rolled the dough and sent it through the pasta extruder), salad and zeppolini for dessert. It was a segregated class—boys grouping together, girls grouping together. Sands said that by the middle of the week, boys and girls team up naturally, working alongside one another.

“The first day [of camp], they might come in a bit intimidated, apprehensive,” Sands said. “A few days later, you see the shift in their comfort level. They come in and start doing things on their own, they make friends, learn teamwork.”

Although the instructor uses the gas stoves, the children use only induction burners that heat the food but are cool to the touch. No more than 20 campers are in a class.

Each week's session—a morning session for children, an afternoon session for teens—is taught by a new instructor and the themes change in deference to the children taking multiple camps. Each day, each session, features a different country, from Europe’s classical cuisines to trendy American and regional American. Most of the children questioned said the cooking classes were their idea, even if it was mom who found the camp on their behalf.

“I like cooking a lot,” said 10-year-old Bella Rosato of Vienna, who admitted her mother found this camp for her. “Cooking is fun.” Bella’s friend and schoolmate Lily Supernor agreed that it’s “fun to cook” because she learns more cooking skills.

Culinaria co-owner and executive vice-president Pete Snaith said he grew up in a household where his mother did not do “serious” cooking, just traditional British food. It was Snaith’s first visit to an Italian restaurant when he was 9 years old that opened his eyes and palate to a world of adventuresome tastes. “It was the first time I had homemade sauce and it was an awakening,” Snaith said. “The more you are exposed to foods, the more you will be opened to other new experiences in life, new adventures.”

Snaith said that, occasionally, a student balks at trying a new taste or food. But, once they do, they are forming a judgment based on personal experience, not a preconceived notion.

Many children come in used to eating certain things, Snaith said, and may be hesitant to try something new. “But, once they do, the looks on their faces are amazing,” he said.

Sands and Snaith see the comfort and confidence levels rise in their campers from day one to the end of the session.

“When we first started Culinaria, we had a vision for teaching kids how to cook, learn new techniques,” said Sands. “We’re cultivating people, not just the kids but in all our classes, to try new things, to experiment.”

Culinaria Cooking camps, for both age groups, run weekly through Aug. 2. There is a one-week hiatus and camp resumes on Aug. 12 for a specialty camp, children’s baking.

“They learn proper techniques, life skills they’ll have forever,” said Sands. “You learn to cook and your diet will be better than what people who never learned to cook have.”

For someone like Sands, who learned to cook as a youngster and put himself through college, cooking and food techniques go beyond learning the elements of making a specific recipe. Once they master techniques, they can be creative knowing their skills back them up.

“The kids forge new friendships, learn how to work together as a team. They learn timing.

“By the end of the week, these kids have a real air of confidence. They go home and try recipes on their family. I think that’s a good thing.”