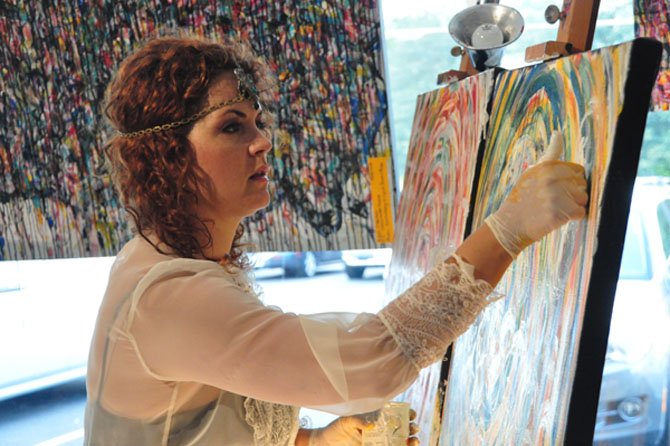 McLean — A steady thump of electronic drums could be heard at the Langley Shopping Center Thursday, July 18. The sounds were aimed to draw people into the Color Wheel Gallery 65 to get a glimpse of live art being created. 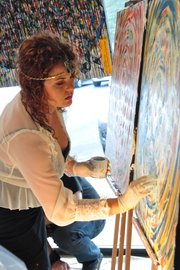 The gallery, which opened in December of last year, hosted performance artist Christine Walters, who created two paintings during the evening, while dozens of visitors observed.

"We were looking for an outside-the-box type of art event, and that’s exactly what Christine brings," said Gail Roberts, director of the gallery. "Along with the music and the painting, guests are able to see an example of how art is created. We’re always looking for new ways for people to experience the arts in McLean."

Walters put a cloth, two easels and two canvasses in the front of the store and Cosmo Lubertazzo, aka DJ Cosmo set up nearby and kept the music going throughout the entire evening.

"My friend and I were picking up a few things at the nearby dry cleaners and heard the music, we couldn’t help but wander in," said Mary Clarke of McLean. "Definitely a fun time, the music was lively, and it seemed like a lot of people were enjoying the experience."

WALTERS, who often creates her art live, and almost always has music playing, said she was excited to show art aficionados how a painting is created.

"What people saw was basically what a lot of artists do all the time, but they’re usually in the privacy of their own studio," she said. "This is a much more open experience, there are the people, the music, the interaction with the DJ. Of course, he gets to interact much more with the people and gauge the flow of the room. I’m focused primarily on the painting. People could be right behind me making faces, and I wouldn’t notice."

Walters said she was a little nervous painting around Gallery 65’s sculptures and painting, but is used to performing in spaces big and small.

Leigh Balks of McLean said that she enjoyed the atmosphere of the performance, as well as seeing an artist compose a painting.

"It was fascinating to see how the music went through her head, and how she decided to put it down on the canvas," she said. "The music was sort of frenetic, but had a steady beat, and I think she was able to capture the chaos of the music with the colors and strokes she used."

She performs often with Lubterazzo, and will soon branch out with other DJs for future performances.

"I love painting that way. The DJ changes songs, changing the flow, and that just allows me to go a different direction," she said. "With Cosmo, he’ll tell me the genre, then just take off and do his thing. If I get in a rut or something, I’ll tell him, and he’ll change it up."

Soon she will perform a benefit for survivors of human trafficking, and will work alongside a DJ that is herself a survivor of trafficking.

"That’s going to be a much more intense experience. The DJ was a runaway who was eventually taken and sold to a sex trafficker, where she was turned into a prostitute, developed a heroin addiction, and eventually escaped when her pimp was arrested," Walters said. "It’s definitely going to be a challenge."

THIS IS THE LATEST performance art by Walters in McLean. She created a piece at last summer’s Painting in the Park event, hosted by the McLean Project for the Arts.

Walters will also have a live performance at the McLean Central Park gazebo Saturday, Aug. 3. She will don a kimono and decorate the gazebo while painting to the entirety of Puccini’s "Madame Butterfly" opera.

The live art event was part of Gallery 65’s "third Thursday" events, which are held on the third Thursday of every month.

Thursday, Aug. 15 will feature a talk that will cover every aspect of framing, from matting to museum glass, and September’s event will be Saturday, Sept. 21 and feature a plein air demonstration by painter Robert Thoren.