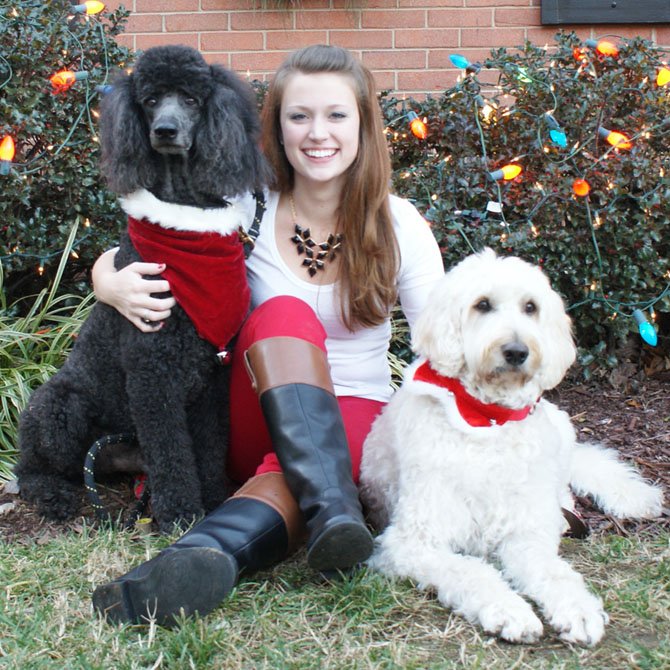 Mount Vernon — On the evening of Feb. 22, 2011 we let our standard poodle, Toby, into the yard for a last potty break before bedtime. We heard a dog bark at Toby. My husband Glenn went into the yard to investigate.

Much to our surprise he found a scruffy looking dog sitting in the far corner of the yard looking down and shaking beyond belief. Our daughter, Lauren, came out with some dog treats and offered them to the dog, and she graciously accepted. We were able to get the dog into our rec room, where she sat shaking. She was covered in urine and feces and it appeared she had just weened a recent litter of puppies. She was a mess but looked very much like a Goldendoodle.

Because we were unable to keep the frightened dog overnight, we contacted the Fairfax County Animal Shelter, which dispatched a staffer to bring the dog to their shelter.

We knew we wanted to adopt the dog — but the shelter told us we would have to wait 7 to 10 days, to see if the dog's previous owner claimed her. I called the shelter regularly checking on her status. On the day she was available for adoption, we were there with paperwork in hand. We adopted her and brought her home.

A vet check revealed that the new dog that we named Annie, in honor of Orphan Annie, had had multiple litters and may never have been allowed out of her crate. She was estimated 5-6 years old and in good health considering. Interestingly, though, it would appear someone has worked with her. She seemed leash and housebroken.

Our best guess is she was dropped here as they had to open the gate to put her in the yard. I suspect from a puppy mill that used her up and discarded her.

Best of all, though, is that the former orphan fits in beautifully with her new family, including Toby who doesn’t often get along with other dogs. Annie likes to sit and wave both front paws at the closest available person to solicit belly rubs. She simply insists that you rub her; that's not optional.

My heart breaks often to think about her early years but trust me . . . we are doing everything we can to make it up to her. She is so grateful and we love her dearly. I highly recommending adopting.