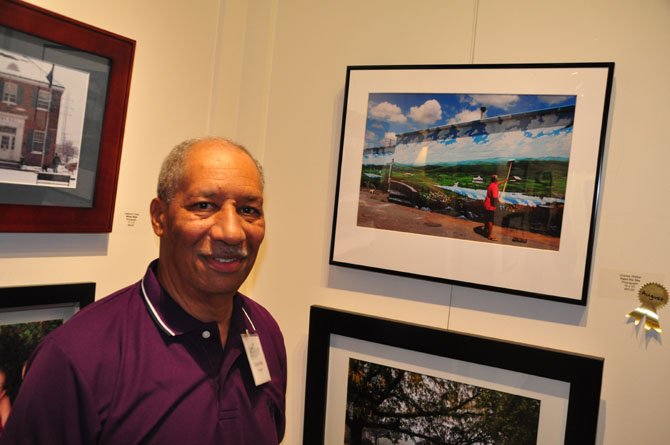 Photographer Charles Walker took two photos that will be a part of the Herndon 2014 Town Calendar. He is next to one of them, called “Paint the Sky.” Photo by Alex McVeigh.

Herndon — The walls of ArtSpace Herndon are currently decorated with almost 60 photos of Herndon’s signature moments. From large events such as the Herndon festival, to the simple pleasure of two children holding hands on a brisk fall day, local photographers submitted their shots for inclusion in the town’s annual calendar.

The following are the selections for the 2014 Town of Herndon calendar, as announced Saturday, July 27.

February—“Cardinal on Palmer” by Charles Walker

August—“Paint the Sky” by Charles Walker

November—“Herndon in the Fog” by Andrew Rhodes

ArtSpace hosted a reception for the photographers Saturday, July 27, and unveiled the selections for the 12 photographs to be featured in the calendar, as well as named the “people’s choice” photo as voted on by those in attendance.

“This is an example of how art helps build communities. This contest is a collaboration between ArtSpace, the Herndon Foundation for the Cultural Arts, the Council for the Arts of Herndon and the town,” said Harlon Reece, president of the Herndon Foundation for the Cultural Arts. “We’ve had amateur and professional photographers going through the town taking pictures for this calendar that will be distributed to all the residents of the Town of Herndon.”

THIS YEAR’S CONTEST featured 138 submissions, 58 of which were named finalists and featured in the ArtSpace exhibit. Judges Lee Love and Carla Steckley, local photographers, were tasked with sifting through the submissions and trying to find an appropriate photo for each month.

“Many of the photos we saw were of locations we’ve both taken ourselves, so it was neat to see what another photographer’s perspective was, what they found interesting about a particular shot,” Love said. “There were many wonderful shots taken, so it was tough to narrow them down.”

Mayor Lisa Merkel praised the artists for discovering so many different facets of the town.

“We know what an asset the arts are for this town. Our council is serious about our downtown revitalization, and we think the arts will play a huge role in that,” she said.

“For this contest, the judges selected a careful mix of people, places and seasonal photos.” Andrew Rhodes was walking his dog through downtown Herndon one morning along the W&OD Trail, when he was struck by the sight of the fog slowly lifting off the ground. “I was relatively new to the area, so I didn’t know about how foggy it got in the morning,” he said. “I was struck with the look of the leaves and a tree through the fog, so I ran home to grab my camera, and luckily I got back before the fog lifted.”

THE EARLY MORNING WEATHER inspired other photographers’ shots as well. December’s selection, “Snow Day on Elden Street” by Kathleen Betti depicts a snowy intersection, but it wasn’t taken during a winter month.

Andrew Rhodes next to his photo “Herndon in the Fog,” which will be included in the town’s 2014 Town Calendar.

“This year, on the first day of my kids’ spring break in March, we had a snowstorm, and it was about 6 a.m. in the morning, and I just walked outside and snapped a picture from my porch,” Betti said. “It’s interesting that it’s a winter picture for the calendar.”

Photographer Charles Walker also benefited from the out-of-season snow. He had two photos selected for the calendar. One, which was chosen for February, is of a cardinal on a snowy branch. The other is a photograph of artist Keith Naquin (who himself had a photo chosen for January) working on one of his downtown murals.

“It was a spring snow, so I went out looking for shots of birds, and I was hoping to see a cardinal, because I knew the red would look great against a white, snowy background,” he said. “The other one I got when I was walking to Jimmy’s, and I saw Keith painting his mural, and was struck by how much his painting looked like the sky above. That’s where the title ‘Paint the Sky’ came from.”

The exhibit of photos, including the winning entries, will be on display at ArtSpace through Sunday, Aug. 4