ArtSpace Herndon Hosts Reception for ‘Beyond the Blue and Grey’ Exhibit

On Saturday, March 2, ArtSpace Herndon hosted an artist’s reception at their location in downtown Herndon. The event was open to the public and provided an opportunity to speak with the artists whose work was on display. 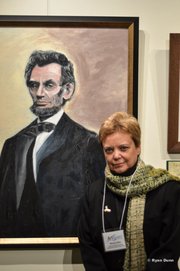 Portrait artist Wendy Allen has been painting portraits of Abraham Lincoln for 27 years.

The title of the exhibit is “Beyond the Blue and Grey: The Virginia Home Front.” This exhibit focuses on the unique attributes of the Virginia “home front” during the American Civil War era, showcasing a collection of ideas of what it meant to be a Virginian between 1830 and 1880.

Professional painter Wendy Allen has been painting portraits of Abraham Lincoln for 27 years and has completed almost 200 Lincoln paintings.

“I thought that contemporary art had turned its back on history so I decided to rebel against modern art. I picked an icon whom I love, Abraham Lincoln,” said Allen. “I just started painting Lincoln and I have not stopped. I paint him in all different styles and techniques. … To me it’s like the American landscape, a uniquely American, fantastic subject for artwork. No matter how abstract I may paint him, people always know it’s him.” 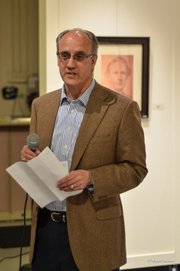 Historian Charles Mauro gave a brief history of Confederate Cavalry Battalion Commander John S. Mosby and his raid on the town of Herndon.

Also present at the ArtSpace event were town officials and council members. “The exhibit is an excellent chance for us to glimpse back at that time period,” said Vice Mayor Connie Hutchison. “I think the exhibit is awesome. It is a great show,” said Sheila A. Olem.

Later in the evening the Herndon Towne Singers sang “Shoo Fly” and “Tenting on the Old Campground,” songs traditionally sung by troops during the Civil War. Historian Charles Mauro then gave a brief history of Confederate Cavalry Battalion Commander John S. Mosby and his raid on the town of Herndon.

The exhibit will continue to be on display at the ArtSpace Herndon until Sunday, April 7.