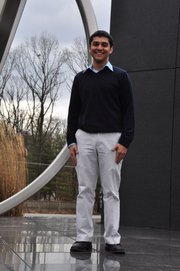 Thomas Jefferson senior Mayank Mahajan received a scholarship from the Siemens Foundation for his high scores on AP tests.

Thomas Jefferson High School for Science and Technology senior Mayank Mahajan enjoys taking on tough challenges. Since his sophomore year at TJ, the Herndon resident has taken AP classes in science, technology, math and engineering, earning 5’s on most of the exams. Mahajan was one of two students in Virginia to be awarded a scholarship from the Siemens Foundation, which recognized the top AP scorers in each state.

“I’ve always looked at AP classes as a good challenge, I like digging deep into subjects, particularly math and science,” Mahajan said. “I also don’t like to accept that there’s something I can’t do, so I always make the effort to succeed. A lot of things are more hyped up than they need to be, and once you put in the work, it’s not so bad.”

He said his favorite subject was AP Physics, because of its real life applications of science and math principles.

Mayank Mahajan, Herndon resident and Thomas Jefferson senior, was awarded a scholarship from the Siemens Foundation.

The Siemens Foundation awards two students from each state, one male and one female, with $2,000 scholarships every year, based on top achievement in science, technology, engineering and math AP exams.

Jennifer Harper-Taylor, president of the Siemens Foundation, said that they focus on science, technology, engineering and math courses because “that’s where the true innovators come from.” 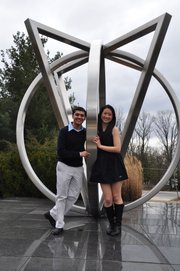 Mayank Mahajan of Herndon and Katherine Ho of McLean, seniors at Thomas Jefferson High School for Science and Technology, were awarded scholarships for their high scores on science, math, engineering and technology AP exams.

Mahajan spent last summer working at the Naval Research Lab, where he focused on nanotechnology, developing a method to detect small amounts of explosives using nanowires made of silicon.

“Nanotechnology is a really interesting and promising field. It wasn’t really what I expected to be doing, but the entire process gave me a great look at the day to day life of scientists and researchers,” he said. “

Mahajan is also a coxswain, in charge of the rowing and steering of the boat, on the school’s crew team. While his academic load has always been a heavy one, Mahajan says he looks forward to his time on the river.

“When you’re out there working hard, and when you’re not surrounded by school and academics, there’s not much time to stress over studying and classes,” he said. "Without that sort of outlet, I think I would have burned out a long time ago."

Mahajan is also participating in the Massachusetts Institute of Technology’s Inventeams Competition, where he and his team work on a product and try and get a grant to develop it.

“We’re working on a bracelet that can be worn by people that have autism. Normally those with autism have trouble figuring out emotional signals from other people, it’s hard to decipher the nonverbal things someone might be expressing,” he said. “Our bracelet will ‘hear’ the tone of voice and pick up what mood the person is trying to convey and show it on screen, hopefully teaching the wearer to pick up those nonverbal cues. We’re currently working on the algorithm that will help the bracelet pick up the speech cues.”

He says he wants to “stay on the STEM path” while in college, either studying math or engineering.

“Next year, no matter where I end up, my goal is to get involved in organizations and immerse myself as not only a student, but a leader, athlete and volunteer,” he said.