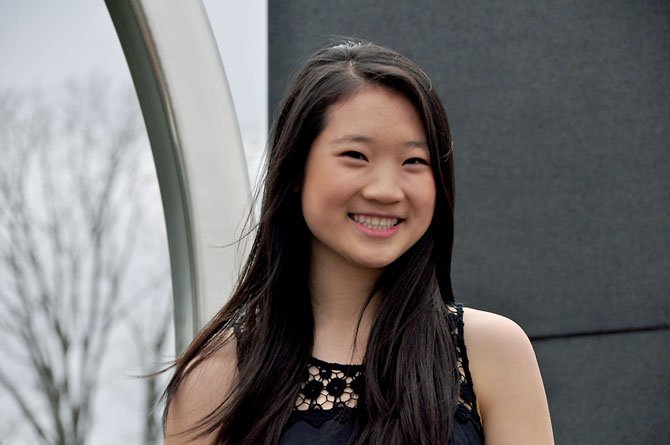 Thomas Jefferson senior Katherine Ho, who was awarded a scholarship by the Siemens Foundation for her performance on AP exams. Ho was one of two awardees from Virginia. Photo by Alex McVeigh.

McLean — For many students, AP classes are a chore, something taken to help college standings or boost GPA and the AP Exams are dreaded all year long. For Katherine Ho of McLean, challenges and problem solving have been part of her life for a long time.

"My dad used to give me riddles to solve all the time, and it really ingrained into me the idea to never give up when you’re looking for an answer," she said. "Now that’s become a big part of who I am."

Ho, a senior at Thomas Jefferson High School for Science and Technology, has been named one of the Virginia winners of the 2012-13 Siemens Award for Advanced Placement. The awards go to one male and female per state, who receive a $2,000 scholarship for college. 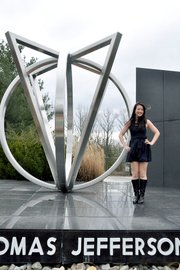 Thomas Jefferson High School for Science and Technology senior Katherine Ho of McLean received a scholarship for being one of the state’s top performers in AP exams by the Siemens Foundation.

THE AWARDS go to students who have earned the greatest number of scores of five on AP exams in biology, calculus, computer science, environmental science, physics-mechanics, physics-electricity and magnetism, and statistics.

Jennifer Harper-Taylor, president of the Siemens Foundation, said that they focus on science, technology, engineering and math courses because "that’s where the true innovators come from."

"For 12 years we’ve been taking math, learning how to solve problems in a book, but it’s exciting to be able to use those concepts in more real life situations," she said. "I’ve always found it to be a fun challenge to take classes that everyone talked about being nearly impossible."

Ho has taken 10 AP classes during her academic career, including many in the science, technology, engineering and math subjects.

"We’re told a lot that a lot of our biggest accomplishments are done by people in their 20s and 30s, so I’ve always believed it’s important to stay as motivated as I can," she said. "I don’t want to limit myself at all, and one of my favorite things about AP classes is that you can often test out of intro classes in college."

In summer 2012 she had an internship at the National Institutes of Health, where she helped work on an imaging probe that tracks the effectiveness of cancer drugs.

"Last summer was my second year at NIH, I spent the first summer learning lab techniques and last year I was able to get into the research aspect," she said. "This coming summer I’ll be able to work in the hospital itself, and I really hope to expand my knowledge."

While taking on a heavy academic load, Ho also finds time to volunteer around the community, as well as play on TJ’s lacrosse and cheerleading teams.

"I think there needs to be other parts of life than just school, and sports are a fun outlet to help refresh my mind and focus on things other than studying," she said.

SHE ALSO VOLUNTEERS with Lift Me Up, a therapeutic horse riding nonprofit in Great Falls.

"My goal is to eventually integrate my STEM education with my volunteer work," she said. "I want to find a way to help people on a day to day basis with what I’ve learned, sort of like what I’ve been able to do at NIH. There’s a big difference when it comes to working in a lab and helping people face to face. I plan to spend my college years looking for ways to do that."

Ho says she hasn’t decided which college she’ll be attending in the fall, but hopes to study mathematics, engineering or physics.