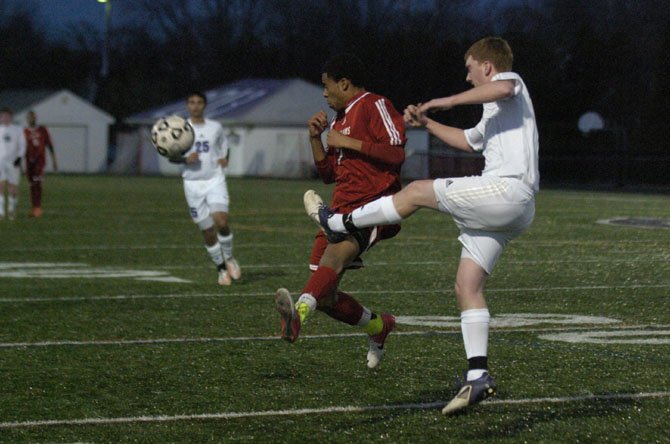 Chantilly — Terell Williamson lifted his jersey over his face and bent over in disappointment. The T.C. Williams forward had missed wide left with a shot during the 56th minute of a scoreless tie against Chantilly in both teams' season opener on Tuesday night.

“I felt like I let my team down on the first one,” Williamson said.

It wouldn’t take long for Williamson to get a shot at redemption.

The senior in the 61st minute scored what proved to be the only goal of the contest as the T.C. Williams boys’ soccer team came away with a 1-0 victory at Chantilly High School.

“It felt great,” Williamson said. “… I just had to keep my head up and [keep] going and just got the second one.”

TC’s scoring opportunities increased in the second half. After Chantilly failed to capitalize on some early chances, the Titans found the net with the game-winner.

“We just talked about trying to take better advantage in the attacking third,” TC head coach Martin Nickley said. “We thought that we could have a little bit more intensity up in the attacking third than we had in the first half. … As a senior, [Williamson is] going to be one of our leaders and one of the players that we all look for not just for scoring, but really for his work ethic and the amount of effort he puts in.”

“The Patriot District is very competitive and we remember from year to year who won the last one. We always know who won it the year before and pay special attention, so I think that definitely teams are going to be ready.”

TC enters the season with a mix of returning athletes from last year’s Patriot District championship team and newcomers from a JV squad that finished the 2012 campaign with an 11-1-1 record. Nickley said goalkeeper Edgar Martinez played well against Chantilly. The sophomore made a key save with less than six minutes remaining in the second half to preserve the shutout.

Senior defenders Neil DeWakar and Marcus Ninman, and sophomore midfielder Eryk Williamson also received praise from Nickley for their efforts against the Chargers.

TC defeated eventual region runner-up Lake Braddock in last year’s Patriot District championship game. The Titans beat Stuart in a penalty-kick shootout during the opening round of the Northern Region tournament before losing to Langley in the quarterfinals.

Nickley said he expects TC to have a target on its back.

“The Patriot District is very competitive and we remember from year to year who won the last one,” Nickley said. “We always know who won it the year before and pay special attention, so I think that definitely teams are going to be ready.”

Chantilly had chances to score early in Tuesday’s contest, including a shot that bounced off the crossbar, but the Chargers came up empty.

“I think we had the better of it toward the beginning and we didn’t get one,” Chantilly head coach Brian Goche said. “… And then the momentum swung.”

While Chantilly failed to score, goalkeeper Mitchell Lagos helped keep the Chargers in the game. The senior is in his third season as Chantilly netminder.

“He’s been very strong for us in previous seasons,” Goche said. “Records the past two seasons in the regular season have not been strong, so he doesn’t always get the accolades that he should get. I think he had 12, 13 saves tonight. … He’s a big boy. We’re going to need him throughout the season to continue playing like that.”

Chantilly went 3-9-1 during last year’s regular season, including an eight-game losing streak, before beating Centreville and Robinson in the Concorde District tournament. The Chargers finished district runner-up, losing to Herndon in the championship game, before falling to Langley in the opening round of regionals.