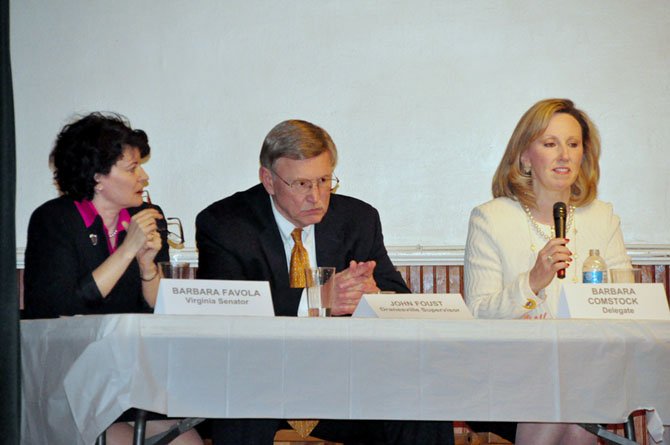 The main topic of concern to local residents was the recent transportation bill passed, and the impacts of the new taxes the bill calls for.

Favola said she supported the transportation plan because it represents a way to bring transportation money to the area, particularly for the Dulles Metrorail project.

"It’s not perfect, but my job is to solve problems the best way I can, and I determined the plan was good enough to vote for," she said. "It’s a new and dedicated source of revenue, which every business group in Fairfax has been begging the General Assembly for."

Comstock said she had some big picture concerns about the plan, particularly in several areas that she felt taxed the Northern Virginia region specifically.

"The first .3 percent of the increase in the sales tax will go to the state, so we will be disproportionately contributing to that, not until you get from .3 up to 6 percent that we get to keep that," she said. "The car sales and hybrid sales is a Northern Virginia tax too. Those were pieces of the bill I was concerned about."

Foust called the bill a "heck of a compromise," and said it would help out with many local issues, including money to widen Route 7 from Tysons Corner.

"We’re going to get Route 7 widened because of this bill," he said. "The other thing that this bill did, which is important to those of us who use the Dulles Toll Road, is put $300 million into the Dulles Rail project which I expect will be used directly to keep tolls down. The only ones in this funding mechanism who didn’t get a voice into who was going to pay what, is the drivers … we’ve been working on ways to reduce the burden on users, and this is a huge win for them."

Another chief area of interest was the state’s expansion of Medicaid to reach more low-income residents with assistance from the federal government. Comstock said she would like to see larger scale health care reform in order to get costs down.

"If we’re going to get good healthcare for people, we’ve got to have fundamental reforms, and that’s what we’re trying to do," she said. "Our budget has gone from 5 percent for healthcare to 21 percent, the biggest growing area of our budget. If we want to have money for healthcare, for colleges and for roads, we’ve got to get healthcare spending under control. If you want to expand it, even with whatever money comes from Washington, we’re going to have to have reforms. Right now a third of doctors don’t participate in Medicaid because it’s a nightmare."

Favola called the plans for the state’s participation in expansion "a very attractive framework." If states want to expand Medicaid population, the federal government covers 100 percent of cost for three years and no less than 90 percent for a 10-year period, which has been estimated at around $23 billion over the 10 years. The current plans involve around a 50-50 split between state and federal government.

"About 400,000 Virginians would be eligible for this program, they are all working, they’re what we call working poor," Favola said. "Make no mistake about it, we’re already paying for their insurance now, and we’re doing it in a very irrational way. They’re going to the emergency room at the point where they are the sickest, and it’s most costly to treat them. The hospitals are taking the cost of this uncompensated care and shifting it to you, I and others and healthcare premiums."

Favola also estimated the expansion would create around 30,000 jobs around the state.