‘Results vs. the Resistance’ or ‘Common-sense vs. Out-of-touch’ in 10th District?
Votes

‘Results vs. the Resistance’ or ‘Common-sense vs. Out-of-touch’ in 10th District? 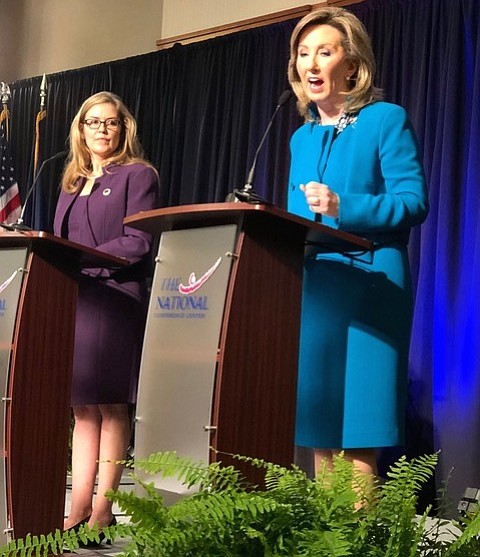 “My record is one of getting results on your priorities…results, not resistance.” —Barbara Comstock

“[Republicans’] actions show that they have no interest in real solutions, only sabotage. Unlike them, when I go to Congress, I’ll work across the aisle to find real solutions.” —Jennifer Wexton

U.S. Rep. Barbara Comstock (R-10) charged directly at Democratic challenger Jennifer Wexton in her opening statement during the candidates’ first debate Friday, casting Wexton as “the most left-wing state senator” who “wants to represent the resistance … and who threatens economic growth and tax cuts.”

Wexton, a former prosecutor and current state senator, shot back, calling Comstock a “political chameleon” who “paints herself as a bipartisan problem-solver” but “won’t stand up for her constituents” against President Donald Trump.

“I fear how much damage can be done by this President and the Congress that enables him,” Wexton said, emphasizing her bipartisan work in the Virginia legislature.

The 90-minute debate, organized by the Loudoun County Chamber of Commerce and held in the National Conference Center ballroom in Leesburg, was attended by a record crowd of 550 members.

Frequently punctuated by applause and whistles from supporters on both sides of the aisle, the debate was the first faceoff in one of the most closely watched congressional races in the nation.

VIRGINIA’S 10TH Congressional District has been held by a Republican for 38 years, but Democrats believe demographic shifts in the sprawling district — which include sections of Fairfax and Prince William counties and all of Loudoun County — and growing opposition to President Trump, will lead to a Democratic victory. In the 2016 election, Trump lost the district by 10 percentage points while Virginia Gov. Ralph Northam, a Democrat, won the district by double digits in 2017.

Wexton has a record of bipartisan success in Richmond, where she passed more than 40 bills while in the minority.

But Comstock’s supporters say she has demonstrated her ability to successfully navigate politics in the “Age of Trump” through her relentless campaigning, fast and furious fundraising, hands-on mastery of local issues and personal connections to people in her district.

“If there is a ribbon cutting or picnic, you can bet Barbara will be here,” said Loudoun County developer David Garmand, who attended Friday’s debate. “She sticks to what’s important to the average business person.”

“These are results to celebrate, not resist,” Comstock said, to loud applause.

Comstock broke with Trump, however, on the key issue of imposing tariffs on U.S. goods, declaring herself a “free trader” who has always “opposed tariffs.”

Wexton agreed that tariffs hurt Virginia farmers and businesses. “President Trump needlessly and recklessly imposed tariffs that are hurting Americans,” Wexton said. Regarding the administration sending bailout checks to farmers, Wexton said “They don’t want a bailout from the government. They want to sell their goods on the open market.”

As with their shared opposition to the tariffs, the candidates mirrored one another on several other issues.

Both said they oppose Congressional moves to expand service at Reagan National Airport at the expense of Dulles International Airport, which is located in the district. Both agreed that the opioid epidemic is a serious public health problem, and that addicts need to be treated, not just punished. Both expressed opposition to President Trump’s proposed freeze on the pay of federal workers, thousands of whom call the 10th District home.

But when the candidates addressed immigration reform, the debate took a heated turn.

Comstock and Wexton both said they supported comprehensive immigration reform, including the expansion of programs enabling tech businesses to bring in skilled immigrants to fill cyber jobs.

“I do support having additional immigration,” Comstock said. “But it needs to be legal and in a fair system. I have supported increasing H1B visas so we can get those high-quality workers.”

“We need to address our immigration challenges in a bipartisan and comprehensive way,” Wexton said, “but President Trump’s divisive rhetoric and policies are only making that more difficult. Immigration is vitally important to our Northern Virginia economy; we have many tech businesses that rely on H1B visas and we have over 30,000 unfilled cyber jobs here in Virginia. Our farmers rely on seasonal immigrant laborers, and we need to make sure that they have them.”

Wexton added that Republicans, who have controlled Congress for years, “have sat on their hands and put kids in cages.” Her comment drew loud and sustained cheers and boos from supporters of each candidate, prompting an “order please” request from the event moderator.

DIFFERENCES between the candidates were also sharply defined on the GOP’s tax reform bill passed last year. Wexton called it the “Trump-Comstock Tax Scam” which she said gives 80 percent of tax cut benefits to the wealthiest one percent of taxpayers and increases the annual deficit by a trillion dollars, instead of helping middle-class families. Comstock said she wanted to expand personal tax cuts and pursue more small business tax cuts.

While both candidates touted their work supporting funding for the Metro system, Wexton said Comstock’s proposals for Metro were so extreme they have failed to earn the support of any other members of Congress in the region. Wexton sharply criticized Comstock for voting against Metrorail’s Silver Line expansion, “but that didn’t stop her from showing up at the ribbon cutting.”

The candidates also split over the Affordable Care Act. Comstock said “Obamacare was a totally partisan bill,” calling it “deeply flawed.” She said she did not support repeal, but instead would seek to fix the problems “piece by piece.”

In their closing statements, the candidates reiterated their campaign rhetoric:

“My record is one of getting results on your priorities … results, not resistance,” Comstock said.

“[Republicans’] actions show that they have no interest in real solutions, only sabotage. Unlike them, when I go to Congress, I’ll work across the aisle to find real solutions,” Wexton said.