In the Line of Duty
Votes

In the Line of Duty 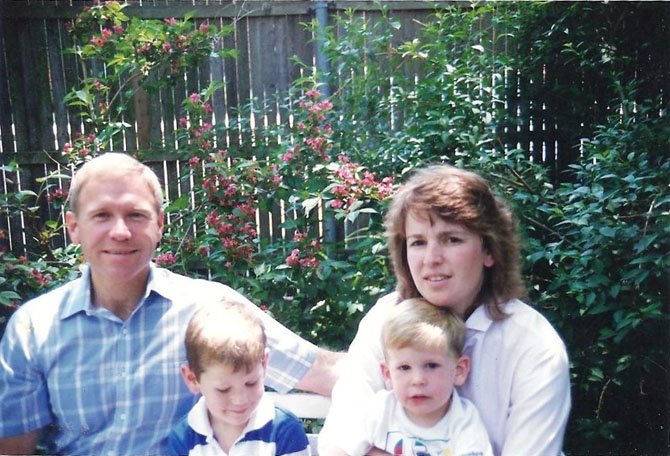 Charlie and Ginny Hill with sons Charles Jr. and Robert. Corporal Charles W. Hill was the last Alexandria police officer to be killed in the line of duty. He died March 22, 1989 during a hostage situation on Hopkins Court in Old Town. Photo Contributed

Alexandria — As thousands of supporters poured into Virtue Feed and Grain restaurant March 10 for a fundraiser for Alexandria Police Officer Peter Laboy, one attendee quietly slipped away to pay a visit to an often-overlooked corner of a park that sits just steps away.

Chuck, I was down in Old Town yesterday for Peter's fundraiser. I walked down to Waterfront Park and said a prayer for you and Peter. I am glad that we don't have to add another name to the plaque there. Peter is doing OK, so many memories as I watched him being taken to the ambulance to be airlifted to Washington Hospital Center. As I was standing there, I realized that you have been gone for as long as I knew you. I remember the first time we met, I was 14 and you were 16, 48 years ago. It will be 24 years next week that you are gone, yet it seems like yesterday. So many memories and emotions, the boys are doing well. Charlie gets married in May and Rob is now with APD. You would be so proud of them, they miss you a lot! I love you and you will always be with me in my heart.
Ginny
March 11, 2013

Ginny is Virginia Hill Obranovich, widow of Corporal Charles W. Hill, the last Alexandria police officer to be killed in the line of duty on March 22, 1989. Though it's been 24 years since his death, she writes to him often on the Officer Down Memorial Page website.

“There's not a day that goes by that I don't think of him,” said Hill Obranovich as she visited the Police Memorial in Waterfront Park that bears her late husband's name. “I sometimes wonder where we'd be now, what we would be doing if that hadn't happened.”

A 13-year-member of the Alexandria police force, Hill was killed when 34-year-old Jamie Wise had taken several hostages in the 300 block of Hopkins Court in Old Town to collect on a drug debt.

After a five-hour standoff, Wise emerged with a sawed-off shotgun pointed at the head of a teenage hostage. A police sharpshooter shot Wise but not before he was able to fire off two rounds. One fatally wounded Hill and the other severely injured Hill's partner, officer Andrew Chelchowski.

“It was just a normal working day for us,” Hill Obranovich recalled. “Chuck was home early playing with the boys when he got the call about the hostage situation. He called me to say that the boys would be with a babysitter when I got home and that he would see me later that night.”

It was about 7:30 p.m. when Hill Obranovich was visited by a police officer accompanied by her pastor.

“I knew right away it wasn't good,” Hill Obranovich said. “I remember running through the house screaming and crying before they took me down to Washington Hospital Center, where Chuck had been medevaced. By the time I arrived, he had been pronounced dead.”

“After that, the days just kind of blurred,” Hill Obranovich said.

Just one month earlier, Hill had celebrated his 40th birthday with his wife and two sons, Charles Jr., and Robert.

“I was downstairs in our basement watching TV with my brother when the doorbell rang,” said Charles Hill Jr., who was 7-years old when he lost his father. “We heard voices upstairs and then my mom screaming. A few minutes later a neighbor came to stay with us. It wasn't until the next day that we knew something was wrong.”

Charles Hill Jr. remembers fragments of his father's funeral, but mostly he just remembers his dad.

“He was the biggest goofball you ever met in your life,” Charles Hill Jr. said with a laugh. “People tell me I have the same sense of humor that he did. He was like a big kid, always smiling or joking despite some of the things we did as kids.”

Robert Hill was 3-years-old at the time of the shooting.

“I have bits and pieces of memories,” said Robert Hill, who is following in his father's footsteps as an Alexandria police officer after spending four years in the military. “One great memory I have is of his birthday before he was killed. I remember him coming in wearing his favorite moose slippers and his laughing as we gave him his presents.”

Hill Obranovich remarried in 1991 and now serves as the volunteer executive director of the Alexandria Police Foundation, where she is joined by her husband Richard Obranovich.

“In 2010 I received a phone call from Deputy Chief [Cleveland] Spruill asking me to volunteer with families of officers,” Hill Obranovich said. “When I found out the APF was raising money for a memorial, I let Chief [Earl] Cook know I would do whatever I could to help.”

Hill Obranovich still volunteers with the department but for now her focus is on the foundation and its efforts to build a memorial to slain officers.

“The building of a memorial means an awful lot to me,” Hill Obranovich said. “It's very important that it gets done.”

As the anniversary of Hill's death approaches, the family each marks the day privately.

“I don't discuss it much with my Mom,” Charles Hill Jr. said. “It's not something I enjoy talking about. It's nice talking about him but not the events that happened.”

Hill Obranovich will mark the anniversary by visiting Waterfront Park and placing flowers by her husband's memorial.

“The building of a memorial means an awful lot to me. It's very important that it gets done.”

“I usually go alone,” Hill Obranovich said. “I know the boys don't like to see me cry but it's very bittersweet. Chuck didn't get to see Robert join the APD or see Charlie so happy and getting married in May.”

Hill Obranovich hopes that the memorial will be able to break gound next year, the 25th anniversary of her husband's death, and then will focus on other efforts of the foundation.

“When I first volunteered for the foundation, it was originally to help raise money for the memorial,” Hill Obranovich said. “But it has evolved into helping the foundation and department overall. Everyone at APD has always been there for me, and I really want to give back something.”

The police firing range and a park in Del Ray have been named in honor of Corporal Hill, who is still remembered by many in the community.

“To this day I run into people that will say they still think about my dad,” Charles Hill Jr. said. “In that respect it's nice to know people really did care about him and that my family and I are not alone.”

For more information on the police memorial, visit www.alexandriapolicefoundation.org.