Love is in the air for Alexandria Police Foundation couple. 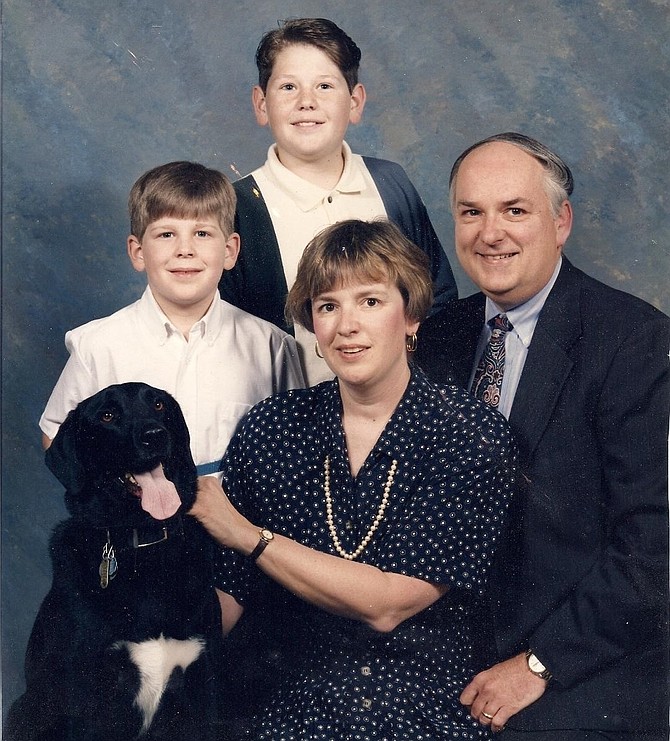 “We don’t argue and truly have a mutual admiration for each other.” —Ginny Obranovich on her 28-year marriage to Richard 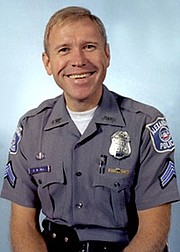 Ginny Obranovich’s first husband, Corporal Charles Hill, was the last APD officer killed in the line of duty, in March of 1989.

Some might call them the odd couple. Virginia “Ginny” Obranovich is outgoing with a vibrant personality, while her husband Richard is more reserved and prefers to stay in the background. But as they approach their 28th wedding anniversary, the two have written their own love story, one that was born out of tragedy.

March 22 will mark 30 years since Obranovich’s first husband, Alexandria Police Corporal Charles Hill, was killed during a hostage situation in Old Town. Hill was the last APD officer killed in the line of duty, leaving behind his wife and two young sons.

“I had known Richard for about 5 years from working at Hecht’s,” said Ginny Obranovich. “I had been widowed for about a year when he asked me out on a date. Things just went from there.”

Richard Obranovich, who worked in the store’s corporate finance department, was divorced at the time and was attracted to Ginny’s sense of independence.

“My main attraction was to her independence and strong direction,” said Richard Obranovich. “Of course there is her great looks and personality as well.”

They were married on May 19, 1991, and together they raised Ginny’s sons, Charles Hill Jr. and Robert Hill, who were ages 7 and 3 at the time of their father’s death.

“Both boys have been very supportive of Richard and me,” Ginny Obranovich said.

“I started with the police department in 2011 as the volunteer coordinator,” Ginny Obranovich said. “Richard decided that in order to see more of me he would volunteer as well. In 2013, we met with the Police Foundation’s Willem Polak and Pat Miller and have been volunteering with the organization ever since.”

When asked about any special plans for Valentine’s Day, the couple laughed.

Valentine’s Day plans this year include meeting with members of the Del Ray business community to discuss the Charles Hill Park, named in memory of Corporal Hill.

“I always try to give Ginny my full support when it comes to anniversaries and special events regarding her former husband,” said Richard Obranovich, who helped with the APF efforts to build the Fallen Officers Memorial located at APD headquarters. The memorial honors Hill and the other 17 Alexandria police officers who have been killed in the line of duty.

Richard’s gesture means a lot to Ginny and her sons.

“That’s important for me, that I don’t forget Charlie,” Ginny Obranovich said. “The boys and I appreciate Richard’s support with that.”

While the couple spends a lot of time together at police headquarters, they also know how to give each other space.

“He does his thing but at the same time it’s nice having him there with me,” said Ginny Obranovich. “His whole background is finance so he knows how to keep me in line with the foundation.”

When asked about the secret to their successful relationship, both said mutual respect is important.

“Richard keeps me grounded,” said Ginny Obranovich. “We are a good balance and I think we get along well. We don’t argue and truly have a mutual admiration for each other.”