Cardinals bounce back from lopsided losses to Visitation, SSSAS. 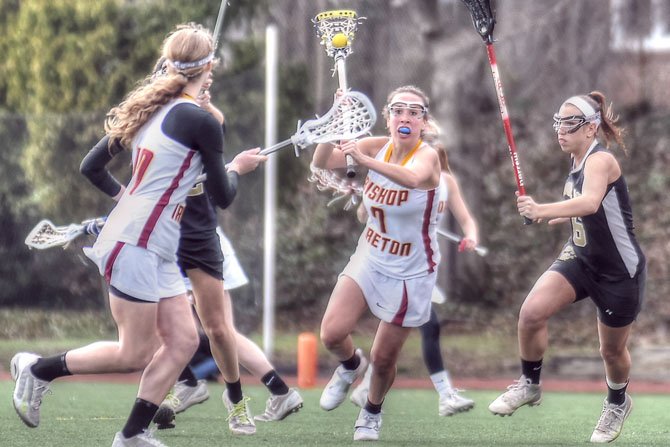 Alexandria — Powered by a nucleus of young, talented athletes, the Bishop Ireton girls’ lacrosse team won its first two games of the 2013 season before facing two of the top programs in the area, if not the country.

On March 18, the Cardinals faced Georgetown Visitation, ranked No. 1 in the Washington, D.C. area by laxpower.com. The result: Visitation 16, Ireton 3.

“It’s a learning process,” Ireton head coach Rick Sofield said was his message to the Cardinals about the two lopsided losses. “The trajectory isn’t always up. It’s ups and downs during the course of a season and you’ve got to stay the course. You’ve got to believe in what we’re trying to do, you’ve got to keep working together and get a little bit better every day.”

On Tuesday, Bishop Ireton hosted Paul VI. The result: much better for the Cardinals.

Bishop Ireton defeated Paul VI 21-9 at Fannon Field. The 21 goals were a season-high for the Cardinals, who improved to 3-2 and are ranked No. 9 in the DC area by laxpower.com. Six Cardinals scored at least two goals and four had at least two assists.

“The girls stepped up,” Sofield said. “They played better than they have their last couple games and we needed that. We had a tough week last week so it was good to rebound.”

“The girls stepped up. They played better than they have their last couple games and we needed that. We had a tough week last week so it was good to rebound.”

“Our team has a lot of young players,” Cunningham said. “[The experienced players are] used to playing [Visitation] and St. Stephen’s, [but] it’s the kind of competition the younger girls haven’t seen before. We definitely learned from it.”

Cunningham is a team captain, along with seniors Brenna Heaney and Charlie Buising.

“When you have a lot of young players on the field, they need to be anchored by maturity and leadership,” Sofield said, “and that’s what we get from those three girls.”

Sofield finished with a team-high six assists. Cunningham, Larkin and Mathews each had two.

Another talented young Cardinal is sophomore Isabel Obregon, who transferred to Ireton from W.T. Woodson after being named Patriot District Player of the Year as a freshman. Obregon underwent nasal surgery to improve her breathing and hopes to return in about a week.

How did the Cardinals remain upbeat after two lopsided losses?

“We’re really positive with each other,” Charlotte Sofield said. “We cheer a lot for each other in practice. It’s all about positivity, getting better, working harder and learning from our mistakes.”

Ireton will return to action on Tuesday, April 2 in Long Island, N.Y., against Sacred Heart Academy. Rick Sofield said the Cardinals have goals of competing for WCAC and state championships.

Performances like Tuesday’s are a step in the right direction.

“What we learned today,” Rick Sofield said Tuesday, “is if you dominate things like draw controls and ground balls, those little hustle plays ... you’re going to get positive results.”