Potomac Area Newcomers’ Club members “are always on the go.” 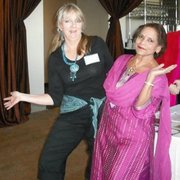 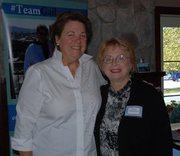 “I don’t know how I would have survived if it hadn’t been for the Potomac Area Newcomers’ Club (PANC),” said Dottie White of Potomac. “This organization was a lifesaver after I moved here from New Jersey to be closer to my kids. I found new friends and discovered a wealth of appealing activities and educational experiences — right in my new community.”

Another member stressed that she relocated to Potomac after her kids had grown up and moved out. “I thought I would have to go to work just to keep from being lonely. I took classes at MC for awhile, but then I learned about PANC — an organization with active members who are always on the go. PANC has something for everyone.”

Pam Lemmonds joined for another reason. She lived in Potomac, but had worked full-time for the many years. When she retired, she learned about PANC from a neighbor. “It was eye-opening to me — and literally saved my life. I had no idea how I would spend my time once I retired, and I didn’t know anyone to do things with, since I had always worked. I immediately formed friendships and learned that there can be life after work.”

PANC has been helping newcomers as well as Potomac residents since February, 1966 when a group of women founded the Potomac Welcome Wagon Club. Their first activity was an invitational open house, attended by 39 women. The group decided that their mutual interest groups would be antiquing, bridge and bowling — and it cost $2 a year to belong. By 1973, membership had grown to 320 women. They decided that Welcome Wagon would limit membership to three years and then members would move on to join a new club called “Echoes” — still in existence today.

However, in 1983, members decided to change the name to the Potomac Area Newcomers’ Club (PANC) to encompass a wider surrounding area and at that time, the three-year rule was abolished. Members could continue their membership indefinitely in order to participate, contribute and maintain their friendships.

President Sara Maria Dan’s goal is “to get the word out about PANC to the many residents in our area. We have so many activities — and a wide range of ages that participate. We want people to know we are here to help them adjust — and we want them to love Montgomery County and Potomac as much as we do. The purpose of PANC has always been the development of fellowship and acquaintance among new residents and their assimilation into the civic life and social activities of the new community. We continually add new members — but many say they wish they had learned about us sooner.”

PANC currently has more than 200 members from Potomac and surrounding communities. The General Meeting is held the second Tuesday of each month at a local restaurant or event site (such as Afternoon Tea at the Strathmore Mansion). After the meeting, a speaker is presented or the group participates in an activity that might include Bollywood Dancing, a cooking demonstration or even tai chi moves The dues are $30 per year.

Long-time member Barbara Gargano describes some of PANC’s many activities. “We have both educational and social activities that provide an opportunity for meeting others and sharing common interests. Some groups meet weekly or monthly, while others have a more flexible schedule. We have Book Clubs, Film Buffs, Great Decisions, Bridge groups at all levels, an Investment Club, Mah Johgg, Museum Trips/New Adventures, PANC Dining inn, Self-defense classes, Genealogy, Infomaniacs, a writer’s group and many more interest groups. Because we live in such a diverse community, we have many members from all over the world. Our French Conversation group and out English for Internationals are both incredibly fun as we learn to speak better French with native speakers and help others from foreign countries to improve their English.”

Suzanne Lamoureux plans the Museum Trips/New Adventures for PANC. “Each month I arrange an interesting sightseeing tour to a museum or to a local place of interest. In January we visited The National Building Museum. We have also traveled to Frederick Country to see the covered bridges, to the Frederick Douglass National Historic Site, the Mary Surratt House, to art exhibits and gardens. In March, we will head to Harper’s Ferry, W.Va. where we will do a walking tour of the historical district. There are so many gems in this area to visit and I love planning and learning more about our surrounding area.

PANC’s newsletter, “The Welcome Mat” is full of information that includes book reviews, recipes, opportunities to volunteer and/or give back, photos of past activities, the schedule and agenda of the small interest groups, member birthdays, a list of new members as well as a bragging page of members’ accomplishments. Their website contains vendor referrals and helpful Montgomery County information.

Whether a newcomer or a long-time resident of Potomac and area communities, to learn more about PANC or in joining, check out www.potomacnewcomers.com. The PANC calendar is listed at http://calendar.yahoo.com/potomacnc. To join, e-mail pancmembbership@yahoo.com.