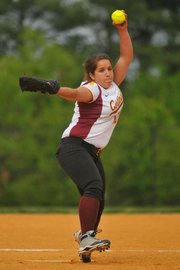 Alexandria — St. Stephen’s & St. Agnes senior standout Alexis Sargent waited on deck for an opportunity to extend her high school career. With one on and two out in the top of the seventh inning, Bishop Ireton pitcher Susan Rhodes made sure the Saints slugger wouldn’t get that chance.

Rhodes retired the Saints’ No. 9 hitter via game-ending groundout and the Bishop Ireton Cardinals defeated St. Stephen’s & St. Agnes 2-1 on Tuesday in the quarterfinals of the VISAA state softball tournament at Luckett Field.

Ireton scored two runs in the first inning and Rhodes made them hold up. The junior left-hander tossed a complete game, allowing one earned run and five hits while walking two and striking out four. Rhodes allowed just two hits during the final five innings.

“She got stronger as they went on and that’s typically what she does,” Ireton head coach Terri Pearson said. “She gets stronger [in] the sixth and seventh inning.”

Pearson said the plan was to pitch carefully to Sargent, the Saints’ primary offensive threat, by keeping the ball down. After walking Sargent in the first and third innings, Rhodes struck her out in the fifth.

Rhodes played second base her first two years on the varsity before moving to pitcher this season.

“It’s a lot of pressure, it’s a lot of leadership, too,” she said. “I have to lead everyone on the field. I’ve gotten used to it because it’s the end of the season now, but it’s a big role."

St. Stephen’s had runners on second and third with one out in the top of the first, but Rhodes got out of the jam with a 1-3-2 double play.

Ireton countered with two runs in the bottom of the first. The first run scored on an illegal pitch by Sargent and the second scored on a groundout by Clara Boggs.

“She got stronger as they went on and that’s typically what she does. She gets stronger [in] the sixth and seventh inning.”

The Saints’ run came in the third inning, when Sargent scored on a groundout by Addison DeLancey. Sargent, who was thrown out at home in the first inning during the 1-3-2 double play, scored with a head-first dive in the third. 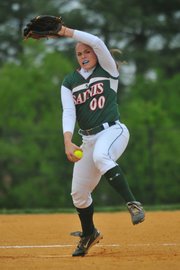 Sargent’s prep career came to a close with the loss. Along with being a feared hitter, Sargent amassed more than 1,000 strikeouts during her four years as a varsity pitcher. She will play for the University of Pennsylvania.

Ireton will travel to Petersburg to face perennial power Bishop O’Connell in the state semifinals at 3 p.m. on Thursday. O’Connell is led by University of Missouri-bound pitcher Tori Finucane and University of North Carolina-bound catcher Jillian Ferraro.

What does Pearson tell her players when it comes to facing O’Connell?

“[I] tell them to try to get the bat on the ball,” she said, “because that girl is going to be pitching for Missouri next year so it would be really nice to watch her on TV next year knowing you got a hit off her.”

“Every single one of our losses was by one run,” Saints head coach Stephanie Koroma said. “Those are tough. Knowing that [our] 11-6 final record could end up being 17-0 or anywhere in between there is tough.”