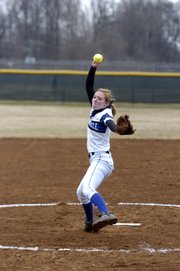 Led by a pair of all-Americans — pitcher Tori Finucane and catcher Jillian Ferraro — the Knights compiled a 57-2 record, including the program’s first 30-win season in 2013, and captured two state championships. Finucane and Ferraro helped O’Connell dominate the competition, but their decorated high school careers came to a close at the end of the 2013 campaign. Finucane is now pitching for the University of Missouri and Ferraro is catching for the University of North Carolina.

On Saturday, the Knights could have used the all-American duo.

O’Connell suffered just its third loss in three seasons on March 22, falling to Lake Braddock 2-1 in Burke. Bruins pitcher Ashley Flesch entered the seventh inning with a perfect game, but hit O’Connell leadoff batter Hayley Metcalf with a 3-2 pitch. After a strikeout and a pop out, Knights first baseman Olivia Giaquinto broke up the no-hitter with a single to right. A Lake Braddock error on the play allowed a run to score and put the tying run in scoring position, but pitcher Erin Sweeney flew out to left field to end the game.

“We lost a lot,” O’Connell head coach Tommy Orndorff said. “… It’s very obvious that we lost probably the best pitcher in the country and one of the best catchers — she got national catcher of the year for the NSCA. We lost two first-team all-Americans and we lost [outfielder and No. 2 hitter] Mary Burk, so we lost three Division I players.

“… [If] we got one or two [runs] last year, we get a win. We had Tori on the mound. This year, that’s all different. We’re going to have to have some production throughout our lineup.”

“Erin did a good job. I don’t think it had anything to do with pitching today. We’ve got to get some runs. … It wasn’t her fault. She should win, giving up two. Hell, [Nationals pitcher Stephen] Strasburg would be [mad] if he lost 2-1.”

Sweeney, a junior, takes over in the pitcher’s circle for the Knights. She faces the challenging task of replacing Finucane, who Orndorff described as a “legend.” On Saturday, Sweeney allowed two runs on six hits. She walked four and struck out three. Orndorff praised Sweeney’s effort.

“Erin did a good job,” Orndorff said. “I don’t think it had anything to do with pitching today. We’ve got to get some runs. … It wasn’t her fault. She should win, giving up two. Hell, [Nationals pitcher Stephen] Strasburg would be [mad] if he lost 2-1.”

Sophomore Jenna Spille takes over at catcher for O’Connell.

Field issues and inclement weather have limited the Knights to practicing in a gym early in the season. However, Orndorff said he expects the team to find its groove.

“I think we’ll be fine,” Orndorff said. “I like our team. We are in no way going to win the way we won last year, but we can still be — and I expect to be — very, very successful. We’ve won [the WCAC] 10 years in a row. I would think [St. Mary’s] Ryken should be considered, like, a favorite, maybe, but it’s still gotta come through Arlington. … Until you slay the champion — and winning it 10 years in a row, I think they’ve got to overtake us.”