With a deft touch, the 2010 Tony Award-winning Best Play "Red" by John Logan will give audiences of the Elden Street Players an inside look at of one of America's great post World War II abstract expressionist painters and creative talents, Mark Rothko.

Rothko is well-known in the D.C. area for his rectangles of painted colors that are hung in the Phillips Collection and in the National Gallery of Art.

Playwright Logan has both screen and theater credits. For the movies he wrote screenplays for “Sweeney Todd,” “The Aviator,” “Gladiator” and "Hugo." For theater he wrote "Never the Sinner" about the infamous Leopold and Loeb case and "Hauptmann" about the Lindbergh baby kidnapping.

"Red" puts the audience in the center of Rothko's life and studio at the zenith of his career. He is struggling with a series of grand-scale paintings he has been commissioned to paint for an elite New York City restaurant. His new assistant arrives and begins to challenge Rothko's artistic vision and integrity. This sets the play off into pitched verbal and philosophical battles that sweep the audience along. 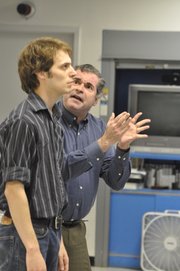 Photo by Matthew Randall/Courtesy of the Elden Street Players

The Elden Street Players production is directed by veteran Gloria DuGan. This is her ninth show for Elden Street following such taunt classics as the recent "Flowers for Algernon." DuGan described Logan's play as "beautifully written and pure genius that the audience will absorb." She noted that Rothko's painting are "far from just blocks of color."

In an interview, Kharfen suggested that "Red" gets deep into an artist's "thinking and doing. Abstract painting is not just splashing paint on a canvas, it is much more. And our perceptions affect how we see Rothko's art when it is before us."

Logan's play puts the audience in the heart of "the struggles, the joy, the tragedies behind a work of art, along with depicting Rothko's humanity," according to Kharfen. "It really is a classic American story, someone has talent, and finds a way to draw attention to his talents."

Brandon Herlig is cast as the assistant, Ken. Herlig is a George Mason University theater student working toward his degree. Asked about his character, he described him as "young, passionate, and eager," just like him.