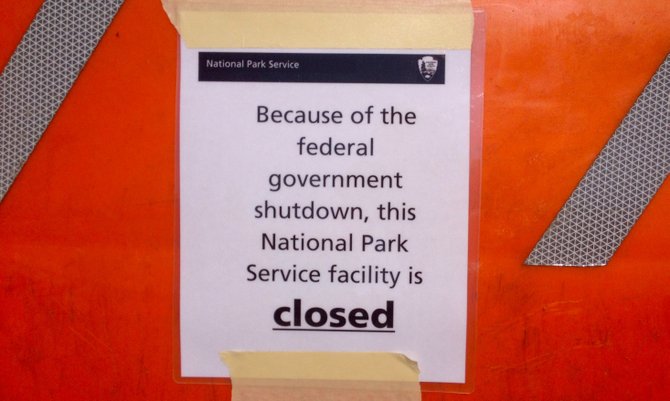 Although the parallel parking spaces leading to the Belle Haven Marina seem like they are available, National Park Service Police were out issuing $85 parking tickets.

Woody Guthrie observed "This Land is Your Land." But that apparently does not apply to federal land during a government shutdown. After Congress failed to come to a budget agreement this week, all National Park Service sites were indefinitely closed. That includes the Mount Vernon Trail, a popular destination that spans from George Washington's Mount Vernon Estate to Theodore Roosevelt Island.

National Park Service personnel were out before sunrise Tuesday morning installing barricades blocking people from using certain parts of the trail. Larger barricades were installed at every parking lot along the way. Restrooms were locked. And a National Park Service officer was stationed at the access road leading to the Belle Haven Marina to make sure automobiles were not parked in spaces labeled "Trailer Parking Only."

"I thought there would be some leniency," said Kevin Johnson, who received an $85 parking ticket from the National Park Service Police. "It's not like we are out hurting people or anything. We're just working out."

Like thousands of other government employees across the region, Johnson was trying to enjoy the downtime — a beautiful and sunny fall day. But National Park Service Police were out in force, issuing several tickets to people who parked in the parallel parking spots leading to the marina because the parking lot was closed.

"A lot of folks are off today and would probably want to exercise to feel better about what's going on," said Sylvia Roden of Alexandria. "It's kind of sad."

"It's just not fair," said Evelyn Ayala of Woodbridge, who was turned away from the Belle Haven parking lot by the barricades. "It's a nice place to hang out, and what are we going to do? It's disappointing."

From the sacred to the profane, the government shutdown reached into every aspect of life in Northern Virginia — some expected and some unexpected. The Defense Department suspended all sports competitions at service academies. All Smithsonian Institutions were shuttered, as was the National Zoo. And about two dozen couples who were planning to get married on the National Mall may have to make other plans.

"Park visitor centers, bathrooms, concession stands, and other facilities are closed," said Johh Garder, director of budget and appropriations for the National Park Service, in a written statement. "Educational programs and special events are expected to be canceled, permits issued for special activities rescinded, hotels and campgrounds emptied, and entrances secured."

UP AND DOWN the Mount Vernon Trail, runners and bikers continued to use the trail in defiance of the shutdown. A spokesman for the National Park Service said that while the trail was officially closed, the organization did not have the manpower to physically kick everyone off the property. That led to confusion among many who used the trail this week.

"I figured since there were no signs on the trail itself or no blocks on the trail that it was open for the moment," said MIke Russell, a retired federal worker who lives in Wellington Heights. "This whole shutdown thing is just a lack of discipline and maturity that seems to be gone from our society more and more."

For many federal workers and non-federal workers, the idea that so many people would have an unexpected day off seemed to be a good thing. Until they got to a trail that was barricaded or a parking lot that was shut down. That's when the abstract nature of the government shutdown became a reality — one that was impossible to ignore.

"I think it's ridiculous," said Margie Remmers of Alexandria. "I think that it's open space and it's public and we should be able to use it."