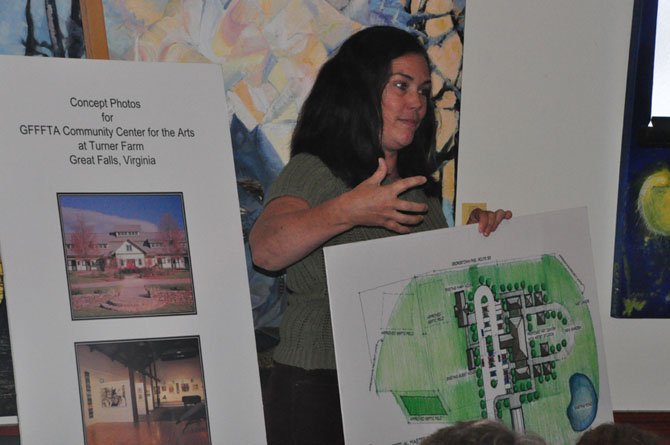 Julie Casso, executive director of the Great Falls Foundation for the Arts, speaks about their ideas for a new arts center at Turner Farm Monday, Sept. 30. Photo by Alex McVeigh.

Great Falls — The Great Falls Foundation for the Arts presented their proposal for an arts center at Turner Farm Monday, Sept. 30 to the local equestrian community, neighbors and residents involved in the “Save the Farm” campaign.

Turner Farm was one of the top-producing dairy farms in Northern Virginia during the 1940s. In 1955, the U.S. Government marked 12.38 acres for use as a Nike Ajax missile battery, one of 16 built around Washington, D.C. during the Cold War.

By 1962 the site was used by the Defense Mapping Agency as a testing center. In 1993, it was handed over by the Military District of Washington to the Fairfax County Park Authority.

Since then, the farm has operated under the motto “hoof beats by day, stargazing by night,” due to its use by the Analemma Society for nighttime sky observances, and the various equestrian arenas and trails used during the day.

The Great Falls Foundation for the Arts was founded in 2007 with the goal of bringing an arts center to the community. After years of proposals and scouting possible locations, they felt Turner Farm would be a suitable venue.

Great Falls residents gather at the library to hear details about the Great Falls Foundation for the Arts proposal for an arts center at Turner Farm.

IN DECEMBER 2011 they started putting together preliminary plans. They currently have the project planned in four phases, which would add a one-story building with a loft, two wings, up to six small studio buildings, a garden and possible renovation of the barn into a performing arts space.

The center would have room for the foundation’s art school, as well as studio space for artists.

The plan originally called for a road to go from the parking lot through the 53-acre cross-country equestrian course and up to the new center. But those plans have been shelved due to concern from park users about having horses, pedestrians and cars all being near the road.

“We no longer plan to have the road run through the park after concerns from the riding community,” said Julie Casso, executive director of the GFFTA. “We’ll know the plans need to be reworked when it comes to a new entrance, possibly something off Springvale, but we don’t know at this point. Currently we don’t have any plans for an access point on Georgetown Pike.”

The Turner Farmhouse is not part of the plans for the arts center. Casso cited “astronomical costs” associated with making it compliant with the Americans With Disabilities Act.

Many in attendance at the Sept. 30 meeting said they wanted to see the land stay as undeveloped as possible.

“Save the Farm didn’t generate a ripple of controversy. Not because the community is made up entirely of equestrians or astronomers, but because everyone in Great Falls was sick of seeing development take over our open space,” said Beverly Crawford, a member of Save the Farm. “We wanted open space, and this project seems to be an incursion on that open space.”

Chris Lehman, a board member of Save the Farm, said he wasn’t opposed to an arts center, just one at Turner Farm.

“A lot of people worked hard to ensure that this land would be protected,” he said. “I love the idea of this kind of facility in Great Falls, however I feel that GFFTA is barking up the wrong tree when it comes to this location. I think another plan for another location would be supported by a lot of people.”

Casso said the GFFTA is open to meeting with any local groups, such as homeowners associations, to bring them up to speed on the plans for the proposed center.

ANY FINAL DECISION would have to go through the county, who are the current owners of the park. They have not made any kind of decision, nor have they even received an official proposal from the foundation, who are still in the fundraising phase.

“This hasn’t even reached an official proposal stage yet, so we’re not even at the point where this project would, or could, be endorsed,” said Rip Sullivan, the Dranesville representative to the park authority board.