First it was Fun Side. Then it was Charmville. Now Alexandria is extraordinary. 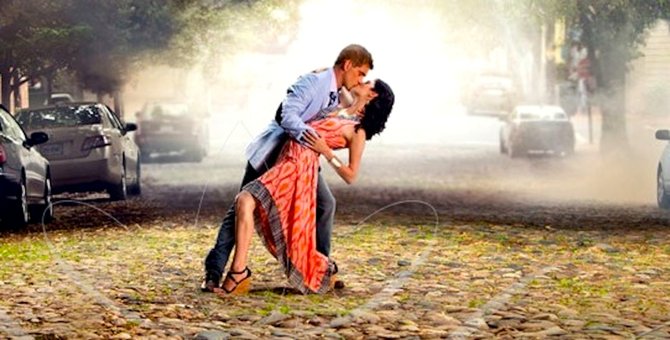 Bodice-ripper or promotional campaign? Some love the city's new marketing campaign while others feels it’s a bit racy.

First Alexandria was the Fun Side of the Potomac. Then it was Charmville. Now Alexandria is being sold as "extraordinary" in a new $1.6 million destination advertising campaign that hopes to generate overnight stays by targeting people within a five-hour drive radius. The campaign features advertising in print, broadcast and digital media.

"We represent the perfect getaway," said Patricia Washington, the organization's new president and chief operating officer. "That could be a romantic getaway or a getaway with their family or with their girlfriends."

Earlier this year, members of the Alexandria City Council approved a $200,000 allocation to increase the existing advertising expenditure budget. The line item was sold as a way to increase revenue for the city, and leaders at the Alexandria Convention and Visitors Association say they expect the $200,000 appropriation will yield $500,000. Last year, leaders of the association made a similar promise when they requested a $100,000 appropriation they promised would yield $300,000 in revenues to the city.

Calculating the exact revenues that come from an advertising campaign can be tricky because it's unclear how many people have booked a hotel room based on an advertisement they saw in a magazine or how much they spent when they arrived here. But ACVA leaders say all the revenue categories they are focused on have increased over the last year. Lodging tax revenue went up $131,000. Room night tax went up about $13,000. Admissions tax revenues went up $91,000. Revenue from the retail sales tax is up $2,8 million, and income from the meals tax increased about $1.8 million.

"Obviously some of the meals tax and some of the retail sales tax are ascribed to local consumers as well," said Kaiden. "Obviously with the two lodging tax numbers are directly related to local marketing because everyone that stays overnight is a visitor by definition."

CRITICS OF THE CAMPAIGN are more interested in the content than the bottom line. Some say the couple doing the Tango on a cobblestone street looks like it was taken from the cover of a romantic bodice ripper. Others say the concept of calling Alexandria "extraordinary" is itself a problem because it makes implications about other localities in the region. Those who are unhappy with the advertising campaign say it does not capture the essence of the city.

"This notion that we are somehow the elite side of the Potomac is self-appointed elitism," said Poul Hertel, co-chair of the Alexandria Federation of Civic Associations. "Maybe we are elite. Maybe we're not. But I think it's bad taste to rub it in the face of everyone else."

Second guessing the city's marketing campaign is nothing new. Detractors ridiculed the "fun side of the Potomac" as juvenile and cartoonish. Critics of "Charmville" said it made the city sound like it was aspiring to be a second-class Baltimore. Now those who are unhappy with "extraordinary Alexandria" are calling attention to everything from the music that appears in the video to the nose ring worn by the female dancing in the streets.

"It's tacky," said Yvonne Weight Callahan, president of the Old Town Civic Association. "We have so many ways to sell the history of Alexandria and the architecture and the ambiance. Do we have to throw in sex as well?"

WHEN ASKED ABOUT CRITICISM of the campaign, ACVA leaders said they received positive feedback when they unveiled the campaign at the Old Town Theater last month. Tickets to the brand launch cost $35 for those who were not association members and $25 for members. Association leaders say those in attendance loved the video and the campaign.

"If you were at our event, which was sold out, when people first saw the video there was an overwhelmingly positive response to the video," said Washington, "and what it evoked in terms of the feeling that people get by being here and the very special sense of place."

The $1.6 million "extraordinary" campaign is built on the theory that every $1 in advertising yields $4 in revenue for the city. That means that association leaders are expecting the additional $200,000 that was appropriated for the campaign earlier this year will create about $500,000 in revenue, although association leaders acknowledge it's difficult to pin down exactly how much spending is a direct result of the advertising campaign. As for the theme, that may continue to be a matter of extraordinary debate.

"Obviously there's been a big push for us to be the tourist side of the Potomac, meaning come in and shop and dine and leave as quickly as you can," said Hertel. "I don't think that's in character with what we are."