Hornets beat Robinson in first round of Conference 5 tournament. 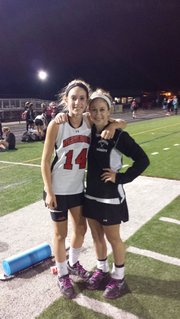 Sisters Sammy Stone, left, and Taylor Stone helped the Herndon field hockey team secure a berth in the 6A North region tournament with a 3-2 victory against Robinson on Oct. 19.

Junior midfielder Taylor Stone labored up and down the field while battling an illness. A pulled hamstring caused freshman forward Sammy Stone to move gingerly on the turf.

Neither of the Stone sisters was at 100 percent Saturday night when the Herndon field hockey team hosted Robinson in the opening round of the Conference 5 tournament. With their season on the line, however, the siblings took the field and made sure the Hornets would play another day.

Taylor Stone scored the game’s first goal and later assisted a goal by Sammy Stone, helping the Hornets beat Robinson 3-2 on Oct. 19 at Herndon High School. With the win, Herndon advanced to the conference tournament semifinals and secured a berth in the 6A North region tournament.

While Herndon entered the game with an 11-5 record, the Hornets had closed the regular season with a three-game losing streak and failed to score in their final two contests. Taylor Stone found the back of the cage midway through the first half, giving Herndon its first goal since an Oct. 8 loss to Westfield.

“Right when we got our first goal,” Taylor Stone said, “we were like, this is our game, this is our time, we’re going to take it.”

Robinson senior forward Amanda Honeycutt scored with 9:03 left in the first half and the teams entered halftime in a 1-all tie.

Early in the second half, Sammy Stone scored on an assist from her older sister. Sammy credited Taylor’s goal for helping the Hornets settle into the game.

“It definitely was huge,” Sammy Stone said. “We were kind of in a rut, not having scored. I think all of us felt a little weight off our shoulders.”

“They’re both very skilled. Taylor is … a tremendously skilled player and a great team player and has a lot of fun. … They work really well together. … Sammy just kind of jumped right in as a freshman [and had success].”

Junior midfielder Alexis Duke’s goal with 19:39 remaining extended the Herndon lead to 3-1. Robinson’s Honeycutt scored her second goal of the evening with 12:53 left, but the Hornets held on to win.

“We’ve been having a great season,” Herndon head coach Mary Miller said. “… It would have been disappointing [to lose].”

Taylor and Sammy Stone, along with Palacios, play for the same club team: Rampage Field Hockey. Taylor Stone said while she’s familiar with Sammy, she doesn’t treat her like a sister on the field.

“On the field, we have a connection sometimes,” Taylor Stone said. “She’s my sister, but on the field, she’s just another teammate. I don’t treat her any differently.”

“She really does keep us all together,” Sammy Stone said, “and she helps us out a lot.”

After Saturday’s game, Taylor Stone led Herndon with 17 goals, according to the Washington Post’s allmetsports.com. She was second on the team with 11 assists. Sammy Stone was third in goal-scoring with eight and third in assists with four.

“They’re both very skilled,” Miller said. “Taylor is … a tremendously skilled player and a great team player and has a lot of fun. … They work really well together. … Sammy just kind of jumped right in as a freshman [and had success].”

Palacios led the team in assists with 17, including two in Saturday’s game against Robinson, and was second in goal-scoring with 13.

Herndon won 11 of its first 13 games, including an eight-game winning streak, and entered the conference tournament as the No. 3 seed. The Hornets will travel to face No. 2 Chantilly in the semifinals at 7 p.m. tonight. The conference championship game is scheduled for 7 p.m. on Thursday, Oct. 24 at Westfield High School.

“This district is tough --- everybody’s [good],” Miller said. “Even a first-round win is a good win. With six strong teams, Herndon, we’re the smallest in the group, so to me, for Herndon to get that first win and to get a regional bid is good.”