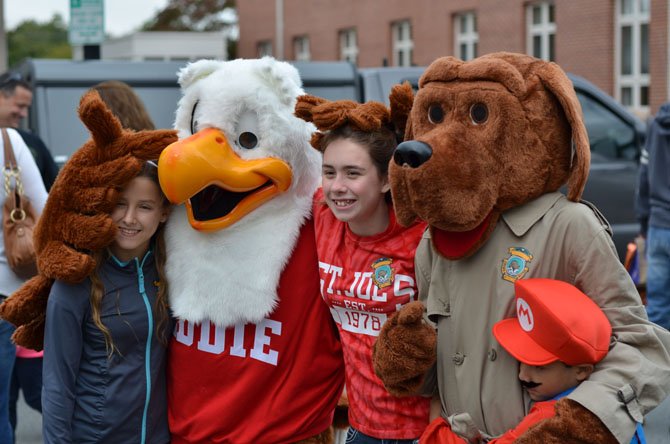 Eddie the Eagle and McGruff the Crime Dog pose for a picture. Students from St. Joseph's school in Herndon helped the costumed mascots. Ryan Dunn

On Oct. 26, from 10 a.m. to noon the Herndon Police Department and the Drug Enforcement Administration (DEA) will give the public an opportunity to prevent pill abuse and theft by ridding their homes of potentially expired, unused, and unwanted prescription drugs. People can bring their medications for disposal to two locations: the lobby of the Herndon Police Department at 397 Herndon Parkway, and the Harbor House at 875 Grace Street, Herndon (10 a.m.-2 p.m.). The service is free and anonymous, no questions asked.

Herndon Public Safety Day took place on Saturday, Oct. 19 at the 700 block of Lynn Street in downtown Herndon, with some activities held in the parking lot of the Municipal Building near the Herndon Fortnightly Library. 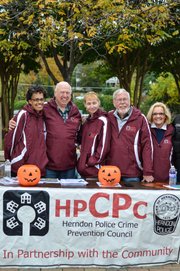 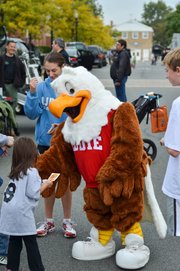 The Herndon Police Crime Prevention Council (HPCPC) is a citizens' organization established to promote crime prevention efforts and to support the mission of the Herndon Police to reduce crime. Members of the HPCPC board include residents, business owners and volunteers. HPCPC provides specialized crime prevention training, promotes the formation of neighborhood, business and fleet watches, and serves as a liaison between the police department and citizens. 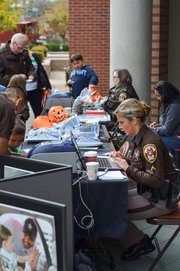 “Most of the volunteers are residents of Herndon,” said Donnell Williams, president of HPCPC. “Our secondary function is when people do not want to talk to the police, they approach us and we provide interface.” HPCPC has been in operation for more than 15 years. 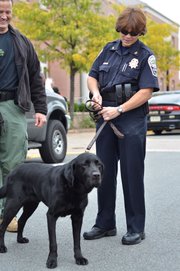 Mascots McGruff the Crime Dog and Eddie Eagle attended the event, as did Marco and Spicy, two bomb dogs trained to detect over 14,000 odors used in explosives. “They are sole purpose dogs,” said dog handler and bomb technician Brian Buckholtz. “We have a total of three dogs, and their sole purpose is to smell explosives.” Buckholtz, a resident of Manassas, joined the Fairfax County Police after service with the Marines. “Fairfax County had a full time bomb squad and that is what I wanted to do,” said Buckholtz.

Near the Town Municipal Center, the Fairfax County Sheriff’s Office had tables set up to do free fingerprinting using inkless technology. “After fingerprinting, we provide the parents the information of the fingerprints on a card free of charge,” said Hyung Kim. 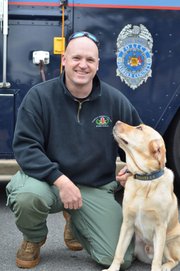 Jacquelyn Einsel, a resident of Herndon, helped provide information at CrisisLink’s booth. Founded by volunteers in 1969 as the Northern Virginia Hotline, CrisisLink is a non-profit that began as an evening hotline for Arlington teens. CrisisLink’s mission is to bring help, hope and healing to empower individuals facing serious life challenges, suicidal thoughts or situational problems. “We want to talk about suicide and make it a safe thing to talk about,” said Einsel.