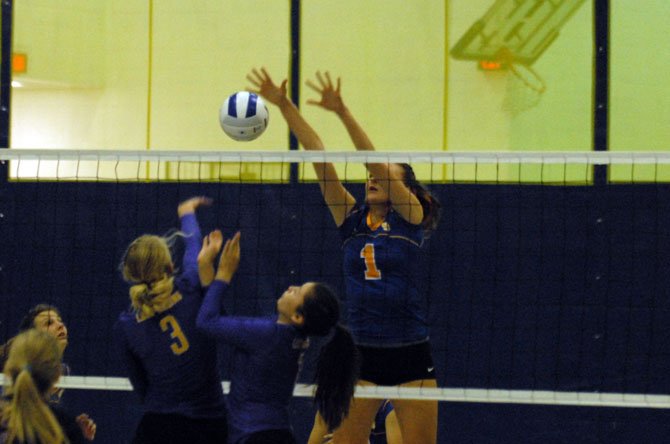 Cunningham, who will play for Villanova University, was one of several Rams who stood out during their Sept. 16 match as the Robinson volleyball team overcame any rust from a 12-day layoff to beat Lake Braddock 3-0 (25-22, 25-19, 25-19) at Robinson Secondary School.

Robinson lost in five sets to Woodson on Sept. 3 and hadn’t played since. Lake Braddock scored the first six points of Monday’s match, but once Robinson settled in, the Rams took care of business, beating the Bruins in straight sets.

“Once we started picking it up,” Cunningham said, “obviously, it carried through.”

Robinson scored five of the final six points to win the opener, including kills by Richardson, Muzzio and junior Abby Nejako. The Rams opened a 17-10 lead in the second set and cruised to victory. In the third set, Robinson used an early 7-0 run to take a 10-6 lead it would not relinquish.

The loss dropped Lake Braddock’s record to 6-3. The Bruins will travel to face Edison at 7:15 p.m. on Thursday, Sept. 19.Robinson improved to 2-1 and will compete in a tournament on Saturday, Sept. 21.

“I think the Rams are definitely a team to watch for the season,” Cunningham said. “We have a lot of heart and a lot of passion for the sport. The chemistry with this group, specifically, is unparalleled. We are a very special group and I think that we can do very big things.”