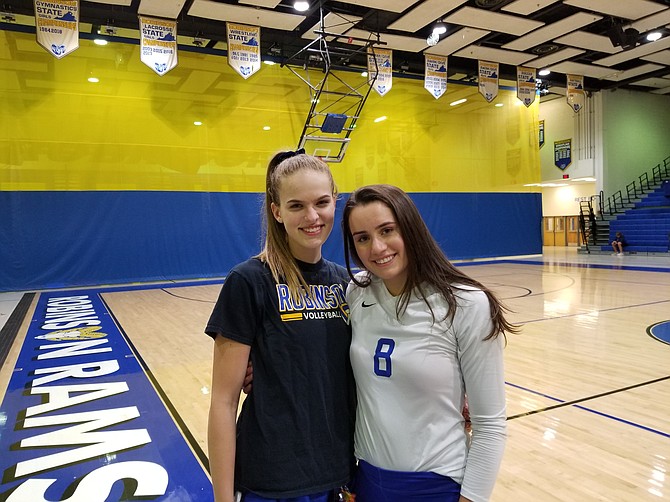 “I love having Olivia (Womble) on the team. …She has so much energy and life, and she is the most passionate player I’ve ever met.” —Senior Captain Faith Lowery

“This is going in the paper?” Johnson joked.

The Rams opened Patriot District play with a 3-0 (25-12, 25-14, 25-19) victory over the Bruins at Robinson Secondary School, but Johnson wasn’t exactly pleased. The fourth-year head coach said the team struggled with serving, serve-receive and passing – areas in which Robinson will need to improve if the Rams are to reach their potential come the postseason.

“I think it’s nice to be able to come in and be good enough,” said Johnson, a 2005 Annandale High School graduate, “but we’re always working toward October. We always say regardless [of] who is on the other side of the court, there are certain things that we are looking for and we need from our team because we are playing for postseason.”

Lowery is in her fourth varsity season and is one of the Rams’ top threats at the net. On Tuesday, she totaled six kills and two aces.

“Faith is ‘Steady Eddie,’” Johnson said. “She’s consistent, she takes a lot of swings for our team and she’s our senior captain, leader. …She’s a go-to hitter for us.”

Womble transferred to Robinson from Fairfax, where she played varsity volleyball as a sophomore. On Tuesday, Womble tallied a team-high nine kills, including the final point of the match.

“She jumps well,” Johnson said. “She’s very athletic, her volleyball knowledge is good, she’s aggressive, she’s passionate and she likes to win. She’s just been a really great addition to our team this year.”

Lowery nearly echoed her coach’s praise of No. 12.

“I love having Olivia on the team,” Lowery said. “She has so much energy and life, and she is the most passionate player I’ve ever met. She just loves to win and hates to lose, and I think that’s what makes a great volleyball player.”

Womble said volleyball has helped with her transition to a new school.

“[The] transition was rough the first few weeks,” Womble said. “…Volleyball really helped get [me] a little group of friends that I can see in the halls. It really helped…getting into the atmosphere at Robinson.”

Lowery said it’s a good thing that Johnson holds the team to a high standard.

“We played a tournament Saturday and our first game was kind of similar to this game,” Lowery said. “We were a little bit off. [Johnson] got on us and we pushed really hard and we ended up winning the tournament. I think that says a lot about our team.”

Grace Pierce finished with seven kills for the Rams on Tuesday, and Kat Fong totaled four kills and three aces.

NEXT UP for Robinson is a home match against Fairfax at 7 p.m. on Thursday, Sept. 13.

Lake Braddock will host Woodson at 7 p.m. on Thursday.