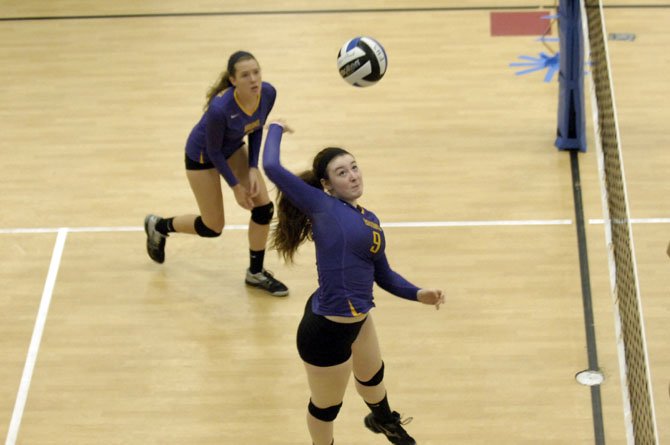 Lake Braddock junior Faith Briden rises up for a kill attempt during the Rebel Volleyball Invitational on Sept. 20 at Fairfax High School. Photo by Craig Sterbutzel. 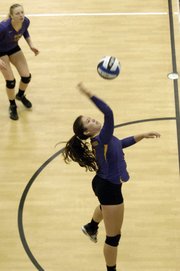 Lake Braddock senior Rachel Tuck was named to the all-tournament team at the 2014 Rebel Volleyball Invitational on Sept. 20.

Lake Braddock volleyball coach Aubrey Eaton said the Bruins’ quality of play of late has resembled the effort they put forth in practice.

On Sept. 20, that effort was enough for Lake Braddock to win the silver bracket (consolation) championship during the 2014 Rebel Volleyball Invitational at Fairfax High School. Eaton, however, thinks the Bruins can do better.

“I thought we performed inconsistently,” she said. “I’m proud that we won the silver bracket, but overall I thought we played very inconsistently. … We have to do better at practicing at the level of intensity that we want to play, because right now the way that we play is exactly how we practice --- a little bit down.”

Lake Braddock finished third out of four teams in Pool A. The Bruins lost to South Lakes (2-1) and Madison (2-0), and beat Islamic Saudi Academy (2-0), earning Lake Braddock a bye in the silver bracket semifinals. The Bruins faced ISA for a second time in the final, beating the Falcons, 2-1.

“[Tuck] is my utility player,” Eaton said. “I can put her just about anywhere on the court and she will perform. … Kara has played consistently well and I look to see her do even bigger things as we move into conference play.”

Lake Braddock defeated Centreville, 3-1, on Tuesday, improving the Bruins’ record to 10-6, including 5-2 in non-tournament matches.The Bruins will travel to face Mount Vernon at 7:15 p.m. on Monday, Sept. 29.

Fairfax’s performance during the 2014 Rebel Volleyball Invitational on Sept. 20 was not the team’s best effort, head coach Tyler Freiheit said. However, the Rebels’ performance during a match against South County four days earlier has Freiheit pumped about the 2014 season.

Fairfax swept South County, 3-0 on Sept. 16, improving the Rebels’ record to 3-1. The Stallions recently improved to 14-2 this season after winning their own tournament on Sept. 20.

How have the Rebels played this season?

“Phenomenal,” Freiheit said. “We’re right where we want to be and that win against South County showed huge progress. We’re going to do really well this year.”

During the Rebel Invitational, Fairfax finished runner-up in Pool B before losing to eventual champion Madison in the goal bracket semifinals.

“Savannah and Taris can’t be stopped,” Freiheit said. “… Alex is a digging machine. She’s pretty much the leader on the court.”

“The Liberty Conference is up in the air,” Freiheit said. “[Defending 6A state champion] Langley has had some injuries. … Especially after seeing Madison with their whole squad and we were playing down, I think it’s anybody’s conference.”