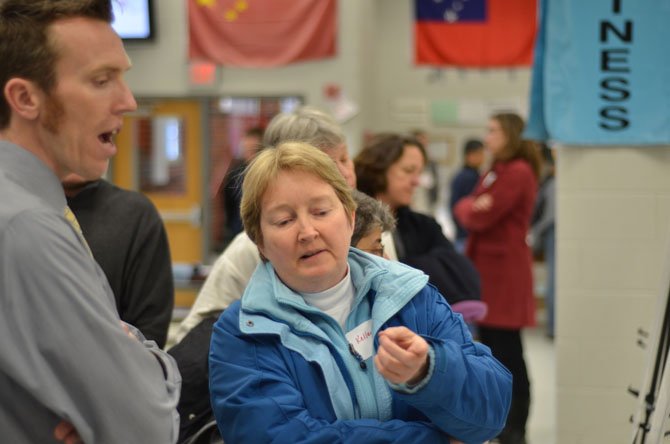 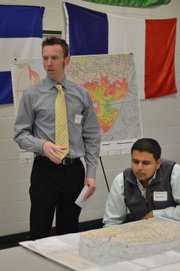 After the main presentation, the audience was divided into groups to review suggested pathways and proposed improvements. In back are Kristen Eddy, Town of Herndon Mayor Lisa Merkel, Rick Hamilton, Cindy Roeder and Kelly Westenhoff. Seated are Iain Banks and Himanshu Verma.

With the incoming Metrorail Silver Line, Fairfax County has begun seeking public input on bike and pedestrian access to Herndon's Silver Line Metro station. The first of two workshops was held at Herndon Middle School at Locust Street on March 26. The meeting was open to the public.

"Tonight's meeting was a great opportunity for citizens to offer input regarding how to improve pedestrian and bike access to our future Metrorail stations,” said Hendon resident Jen Baker. After the presentation, the four groups were formed to review the suggested pathways and improvements proposed.

Kelley Westenhoff attended the March 26 meeting with her son. “It was nice to have so many pedestrians and bicyclists concerned about the same issues, largely in the same map locations,” stated Westenhoff. “It was also nice to hear people thinking about the others not represented at the meeting… service workers who travel in the dark, by bike and foot, and often face greater risk due to lack of lights and knowledge.”

An advisory group of fifteen citizens was formed and has been meeting to guide the study in coordination with Fairfax County Department of Transportation (FCDOT) staff, making sure diverse interests of the study area are addressed and represented. One member of this group is Charlie Strunk, bicycle coordinator for the Fairfax County Department of Transportation. “I thought the meeting went well and got a lot of good feedback from the citizens,” stated Strunk.

The consulting firm of Kimley-Horn and Associates, Inc. is working with the advisory group to identify, confirm, and guide the analysis and development of recommendations. Morley-Nikfar said results from the studies and online survey would be made public in June, with the public meetings summarized in a final report that will be finalized in May. “The final document can be used by the Town of Herndon for negotiating for redevelopment,” said Morley-Nikfar.

The Silver Line will be a 23.1-mile Metrorail extension connecting the Tysons, Reston, Herndon, and Dulles Airport areas of Fairfax County to the regional Metrorail system. The Silver Line is being constructed by the Metropolitan Washington Airports Authority (MWAA) in two phases. The Herndon Station and Innovation Center Station are metro stations both part of Phase 2 for the Silver Line. Opening dates will be determined by the Metropolitan Washington Area Transit Authority.