‘Another Way of Living’ Celebrates Reston 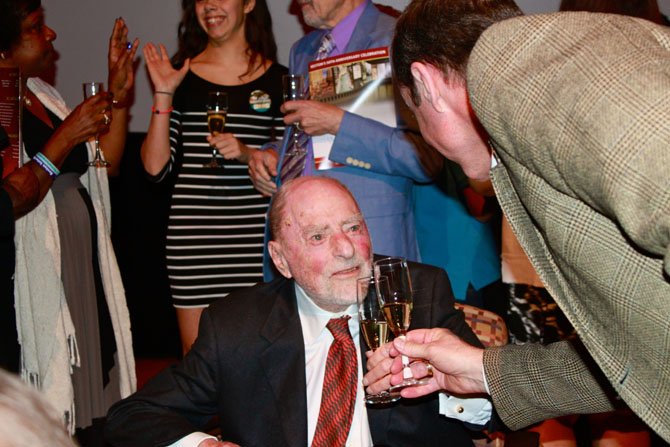 Restonians toasted their well wishes to Robert Simon after the film screening. 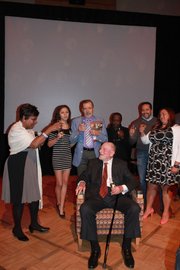 When Rebekah Wingert-Jabi began to piece together a film about Reston’s history to date, she realized each member of the community created the web that shaped it.Her film, “Another Way of Living - The Story of Reston, VA,” was screened at the Reston Community Center on Saturday night as a part of the Reston Founder’s Day celebrations.“It wasn’t until I left Reston that I realized what a special place it was,” she said.The film, which took two years to create, weaves back and forth through Reston’s history and founder Robert Simon Jr.’s life. It showed how a place that once headlined as “An unlikely success story” is now the community for 75,000 people and counting.After the film screening, a champagne toast was held for Simon’s and Reston’s milestone birthdays.The majority of the film’s funding came from RCC, according to the center’s Executive Director Leila Gordon. “The community center knew the 50th anniversary was going to be a special milestone,” she said. “We wanted a legacy that would be meaningful to the people who founded Reston, to the people who are here and the people yet to come.”The film follows Simon on many of his walks around town, giving high-fives to community members and how he met his wife - Cheryl - during one of his excursions through the community he created.Simon’s quirky personality and passionate spirit drove the most of the film, but recent housing issues due to the Metrorail extension were also explored. Although Reston was built to be socio-economically diverse, many of the community members who live in public housing apartments are concerned that the Silver Line will increase the value of the properties to the point that they will not be able to afford them. Audience members who laughed at Simon’s jokes were in tears as a struggling single mother hugged her daughter who just received her diploma from South Lakes High School.“I didn’t know Reston until tonight,” said NBC4 News anchor Barbara Harrison during a panel interview with the film producer. “I laughed with you. I cried with you. I see the magic of this place now.”The film also made current residents reminisce about why they decided to move to Reston in the first place.“I loved it,” said resident Charlotte Geary. “We’ve been here for three years, but I feel like I never want to leave now.”Wingert-Jabi made sure to thank RCC and Leila Gordon for supporting her film.“It’s so hard for filmmakers to have people who believe in and support their work,” she said.