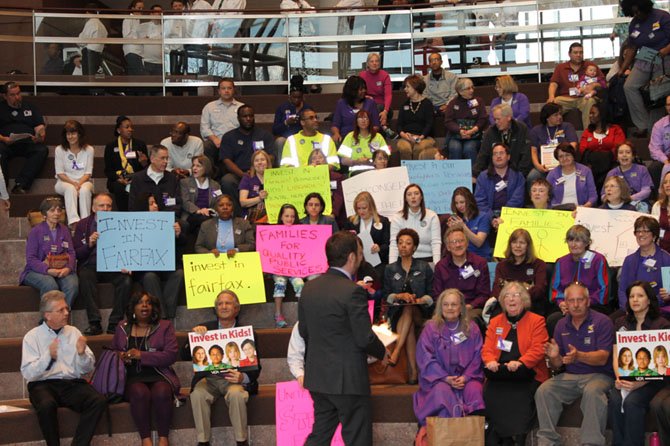 The new "Invest in Fairfax" coalition gathers to advocate for teachers, public service workers, libraries and parks at a rally during the budget hearings on April 9. Photo by Janelle Germanos.

“Invest in Us, Invest in Fairfax.”

That was the rallying cry last week at the Fairfax County Government Center as advocates for schools, libraries, parks, government employees and other human services gathered in support of more funding in these areas. 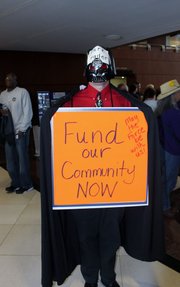 The rally occurred during the second day of the budget hearing, in which concerned citizens were able to speak in front of the Board of Supervisors, voicing their opinions on the FY 2015 budget.

For members of the newly formed “Invest in Fairfax” coalition, the message is clear: More funding is needed to keep Fairfax County a high-quality community.

“We feel that we’re at a tipping point, not just at the schools, but in the county,” said Kimberly Adams, president of the Fairfax Education Association. “We think that if we don’t continue to fund services at an adequate or high enough level, we’re going to start to lose.”

“INVEST IN FAIRFAX” is worried that the decline of the school system will keep businesses and families from moving to Fairfax. It’s the high-quality schools, libraries and other public services, they believe, that attract families and businesses to Fairfax in the first place.

Adams says that teachers are leaving the school system in search of better opportunities elsewhere. Their workload has increased while their pay has remained stagnant.

County services as a whole, the coalition argues, are not adequately funded.

“This is the first time we’ve seen them advertise a tax rate of two cents. We want them to take it to the limit,” Adams said.

Yvonne Wallace, vice president of the Fairfax County Employees Union, wants the Board of Supervisors to recognize the value in government employees. She says government employees are behind other jurisdictions in terms of pay, and that many employees have moved to these neighboring areas for the better pay.

Wallace is hoping for a pay raise, and payment plan for all S-Scale government employees. The lack of funding, she says, is frustrating.

“I think it says that they don’t really value the employees that we have here. Hopefully they won’t leave us out of the budget,” Wallace said.

Former Del. Jim Dillard speaks to a crowd gathered at the “Invest in Fairfax” rally during the Fairfax County budget hearings on April 9.

IN HER TESTIMONY to the Board of Supervisors on April 8, Adams stressed that all citizens benefit from a strong public school system.

“I’ve heard the refrain that citizens on a fixed income cannot afford any more taxes. Well, ladies and gentleman, my income has been fixed for the past five years,” Adams said, citing increases in health care and retirement service costs.

Steven Greenburg, president of the Fairfax County Federation of Teachers, donned a Darth Vader mask and cape while playing “Imperial March” during his testimony.

“All of the debate over this budget is hurting all of our morale. It brings out the dark side in all of us. Especially our teachers,” Greenburg said.

Greenburg, while advocating for full funding of the school system, also voiced his support for Fairfax County government employees, parks, libraries and other human services, demonstrating the connectivity of the new “Invest in Fairfax” coalition.

The Board of Supervisors will formally adopt the budget on April 29.