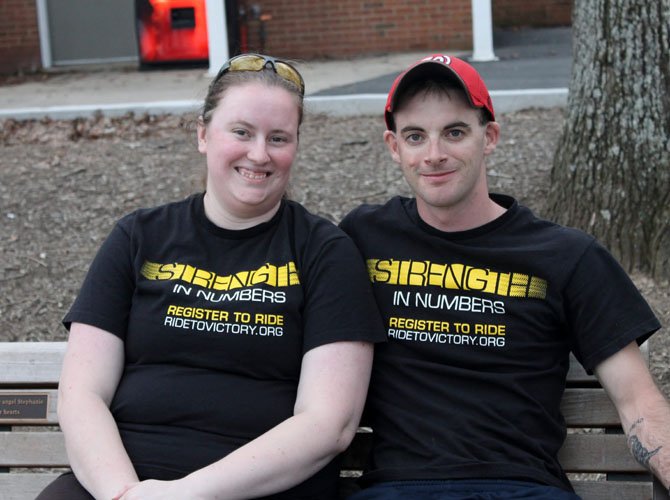 Lorton residents Kim and James Reno, graduates of West Springfield High School, hope to raise $5,000 dollars each for the Ride to Conquer Cancer in September. Photo by Janelle Germanos. 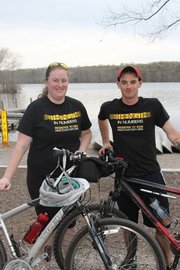 Kim and James Reno of Lorton are training for the Ride to Conquer Cancer and are hoping to raise $5,000 dollars each. All of the funds raised go to cancer research at Johns Hopkins Kimmel Cancer Center, Sibley Memorial and Suburban Hospitals.

The two-day, 150-mile bike ride will take them through the D.C. area as they raise money and awareness for cancer research. Both Kim and James need to raise at least $2,500 dollars, but are aiming for $5,000 each.

All of the money raised goes to doctors and hospitals working with cancer treatment and research at Johns Hopkins Kimmel Cancer Center, Sibley Memorial and Suburban Hospitals.

Kim, 25, has family members who have battled cancer. She has an uncle still battling cancer, and an aunt who lost her battle to cancer, making the Ride to Conquer Cancer a great opportunity to raise money and awareness.

“It means a lot to me. We kept looking for stuff we could do to make a difference,” Kim said.

James, 26, grew up riding a bicycle, and went on a lot of long rides with his father. Kim enjoyed shorter rides and began riding more seriously when James moved back to the area. Since she said she isn’t a runner, the two decided to sign up for the Ride to Conquer Cancer.

Under the team name “Ride to Thrive,” the ride will take James and Kim, along with thousands of other bikers from across North America, through the countryside around the Washington, D.C. area on Sept. 13 and 14.

“Every couple of days we try to get out and ride,” James said. “Closer to the time of the ride, we’re probably going to try to do a single 75-mile ride in one day.”

Kim and James Reno, of Lorton, enjoy a ride at Burke Lake Park. The two graduated from West Springfield High School and are now training for the first annual Ride to Conquer Cancer.

Kim has almost reached the halfway mark for her $5,000 fundraising goal. James is a little bit further behind.

“I need to get out there and fundraise,” he said.

Although they are sometimes sore after the long hours of training, Kim and James are keeping their eyes on their goal.

The race gives Kim and James an opportunity to make a difference, as she said loved ones of those battling cancer often don’t know what they can do to help.

“Being able to raise this money and to help with new research and cures means a lot,” Kim said.

And, being out in the fresh air is also enjoyable for the couple.