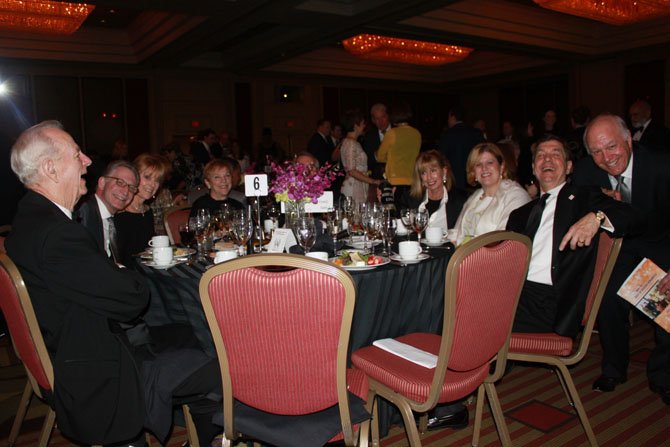 The Charles A. Veatch Family table at the 23rd annual Best of Reston. 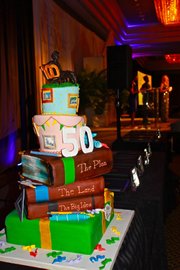 The Cornerstones table at this year’s Best of Reston event.

Cornerstones reveals the result of their two year fundraiser. 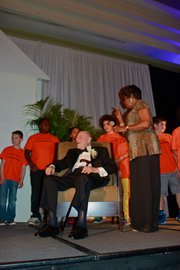 Bob Simon claps along to the beat as the audience and children sing him Happy Birthday during the 23rd annual Best of Reston celebration.

Reston is a place where - as they say - people can live, play, work and serve.

The Best of Reston honored those committed to community service and celebrated founder Robert Simon’s 100th birthday on Thursday with a black-tie affair at the Hyatt Regency in Reston Town Center.

“This community takes pride in the people who serve,” said GRCC President Mark S. Ingrao. “We’ve been thinking so much about that in the last few weeks with all the celebrations going on here. I don’t know if it’s the water in Lake Anne or the secret ingredient in Bob’s lunchtime beverage, but there’s something about the community that says, ‘You are welcome here.’”

The night was also the end of a two year joint effort to raise $1 million to double the number of affordable housing units in Reston. After all the money was collected and more donations were given from the floor at the event, Cornerstones found out they had gone over their goal.

“It’s such big money, and it’s hard to explain the gratitude to everyone here,” she said.

She announced that she just made an agreement to construct 48 more housing units in Reston.

“We intend to tear down the shelter and build more apartments, build more housing,” she said.

According to a press release, “the apartment units will provide permanent safe, attractive and affordable housing for working families and families coming out of the Embry Rucker Community Shelter.”

Simon, who turned 100 that night, received a colorful cake and more than 800 people singing “Happy Birthday” to him. He was presented with some gifts, including a 100-year-old bottle of wine the same vintage from when he was born.

“World War I had just started in 1914,” said Rep. Gerald Connolly (D-11). “Nobody had seen anything like it. They didn’t think it was going to last very long, but it completely transformed the world Bob was born into.”

However, it was Simon’s travels and vision that shaped the cattle pasture that is known today as Reston.

MORE INFORMATION ABOUT THE HONOREES, according to the press release: